Perhaps to cleanse the bad taste in our mouths from yesterday's defeat of the Red of Skin, Freddie and I hiked up Short Hill this morning to get a look around. It's not a huge mountain -- the vertical drop is about 800 feet, some one and a half Washington Monuments. But we were both woofing when we got to the top. The climbing is tiring enough, but the writhing through, under and over brambles and downed trees is pretty exhausting.

The view from the top rewards the effort, though. Short Hill is a ten-mile-long ridge that begins in Hillsboro to the south and plunges dramatically into the Potomac at the north end. From the summit, at "our" end of the ridge, the view west encompasses three states -- Virginia, West Virginia and Maryland. The railroad bridge from Sandy Hook to Harpers Ferry is just visible, and on the northern vista you can see South Mountain. It's a Civil War lesson writ large: You can point to Harpers Ferry, Sharpsburg is just around one corner, and Gettysburg is just out of sight over yonder.

As you stand on Buzzard Rock, below your feet is a steep, broken cliff that, if you clamber down it, reveals caves and myriad hidey-holes. I have absolutely no doubt that mad young John Mobberly knew well of these caves, explored them as a young lad, and used them as his stronghold in his guerrilla raids on the farmers and encamped armies in both valleys below. (Not talking Carlsbad Caverns, here -- these are literally little cracks between boulders where a man, or perhaps two, can easily disappear from a tracker unfamiliar with the territory. Mobberly was famous for his ability to do just that.)

Besides the Football Disappointment, I had another motive to explore Buzzard Rock. On a previous hike, I had noticed something that made me regret not having brought my camera:

Graffiti, carved into the living stone of Buzzard Rock. Quite old graffiti, too. This one's dated "'88," and dollars to doughnuts that's not nineteen eighty-eight: 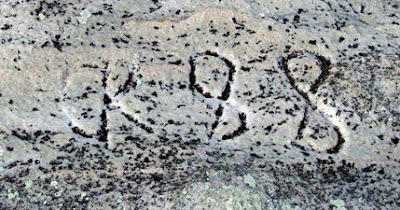 Here's the oldest one that I could find: 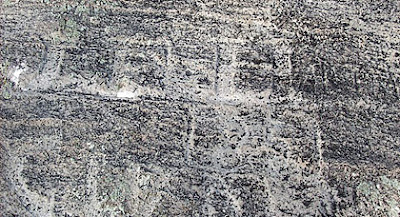 John F. Hartman, of Waters, as it turns out. (The place-name has died out, but it's at the lower left quadrant of that panorama at the top of this post -- basically at our feet.). I just found him in the voter rolls of the May 1861 Virginia Vote on Secession; he voted with the Union. There's no Hartman residence marked on the 1854 Yardley Taylor map of Loudoun County, but that doesn't mean much. (My house isn't on it either.)

(If any of you with paid access to the materials at Genealogy.com want to research any more about him, please don't let me stop you!)

Hartman probably -- no, almost certainly -- knew Mobberly, who also lived in Waters, a very small settlement. Quite possibly ran into him up here while he carved his name: Mobberly would have been about nine years old when that graffito was carved, living just a mile or two away, and exploring the mountain like a young goat.

Our photography of the graffiti accomplished, we walked along the ridgetop southward to White Rock, which commands a view of the German Settlement and the Catoctin Valley to the east of the ridge.

On a clear day, you can see as far as Sugarloaf Mountain, also in Maryland, as well as Furnace Mountain and Catoctin Mountain. Lovettsville is laid out at your feet. Today was a bit hazy, so distant details weren't clear, but we did get a lovely view.

The view east, at White Rock. Brunswick, MD, left, Lovettsville below. As before, click to embiggen, won't you?.

It was a bright, unseasonably warm day, and we both shed our coats as we admired the view and pointed out the houses and geographical features that we recognized.

On the walk down (nearly as physically arduous as the trip up!), we found the remains of yet another road, this one marked on no map that I've ever studied. Almost certainly a logging road, used to bring down felled trees from the wood-lots far uphill, it may also have been used as an access to higher-up cabins that have long since been lost. I found cornerstones to lots I'm familiar with, and several mysterious fenceposts that hint that the mountain was once cleared for farming far higher than I'd previously thought.

So, scratched-up and filthy, the two wanderers returned home with tales to tell.

These kinds of ramble-posts are the first that I read of yours and caused me to bookmark your blog. I'm glad you have recovered enough from your surgery to get out and about again.

Well, thank you, Mike, that's very kind of you to say.

Yes, strength returns with every passing day. On the way down the mountain, I observed to Freddie that I felt my old skiing muscles calling to me, that the next time our friends the Nasrs invited us to hit the slopes, I just might take them up on it. See if I can still execute the old bump-bashing skills I had so disciplined when I was 20. Just hope I don't humiliate myself.

I second what Mike said, Neddie - these are some of your best posts.

And as for John Hartman - this kind of stuff is addictive for me:

I've got Ancestry.com, not Geneaology.com, so my sources might not be as good. I can't find Waters - was that in Louden County? Do you have anything else?

This was indeed a great post to read. I've been far too caught up in politics lately. Foaming at the mouth and so on.

Thanks for the reminder that people are leading real lives -- where they walk around and stuff.

Second all that guff about it being good to hear about you getting around, but ... you gotta get some better stitchin' software. Or maybe a camera that can lock the exposure? But there are niggardly niggles.

Actually, I was just thinking those pics are "perfect" as is and would make a great album cover...but that's just me...:-)

When you read the rambling posts, whistle the theme to "Peter and the Wolf"

I live in the wrong goddam place.

I used to live near Brittain back in the 1970's. I know this mountain very well from Morrisonville Road south to Hillsboro, with limited knowledge of the remainder. I've been wanting to hike to both White Rock and Buzzard Rock, with a small group sometime this fall. But I'm not quite sure how to access the ridge. Any help you could provide me would be great. Many Thanks, Bill Wine