A few years ago, I posted a less-than-completely-serious essay about a vicious quintuple murder that took place in 1943 in Purcellville, near where I live. We Jingos decided one lazy afternoon to try to find the house from the description given in an early-1960s edition of True Detective. We thought we'd found the house, but it wasn't the right one. Then, we got a little silly.

But the murders did indeed happen, and now a serious professional journalist (as opposed to a frivolous, amateur asshat blogger) has begun publishing a series of articles about them in the Loudoun Independent, and they're pretty fascinating reading.

Parts 3 and 4, to be published Thursday week and Thursday fortnight, are about, respectively, the investigation and quick arrest, and the trial and execution.
Posted by Neddie at 3:02 PM 5 comments:

All right, who's the joker who signed me up for the Red State Trike Force daily newsletter?

Not cool, man. Not cool.

This email was sent to [your address] because you are subscribed to RedState Army of Activists or General Announcements list. 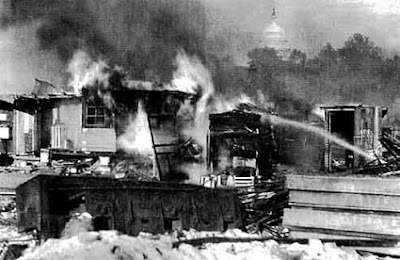 It passes with not much general observation, but on today's date in 1932, Gen. Douglas MacArthur and Maj. George Patton turned the full wrath of the U. S. Army on World War I veterans on the streets of Washington, DC and Anacostia.

NPR had a feature on this event this afternoon, an interview with the author of a book on the Bonus Marches, and an interview with a surviving eyewitness, who at the time was a boy of eight and a resident of the city. I had no idea the event was so significant; it was the negative example of the Bonus Army that was most responsible for the passage of the GI Bill, for instance, that did so much to create a post-WW II middle class. It happened during a Presidential campaign, and had Katrina-like effects on Hoover's presidency. Afterward, Roosevelt's electoral strategy changed drastically; he no longer had to even mention his opponent in his communications. Another new fact for me: The Bonus Army was entirely integrated. Black and white folks camped together in the Hoovervilles -- very disciplined places, apparently, run by veterans who knew a thing or two about hygiene in the field -- sleeping side by side in tents.
Posted by Neddie at 3:30 PM 5 comments:

In Observation of the Fortieth Anniversary of Apollo 11

If you can remember this jingle...
Find more videos like this on video.filestube.com.

...you may remember what it was like to watch Bob McAllister's Wonderama on a lazy summer morning in 1969 when flying cars and jet-packs and Star Trek were just around the corner -- we'd probably have 'em by the time I was my forties. Stanley Kubrick said so, dammit. And we'd always have fantastic bubblegum jingles behind our ads.

True story: On a trip through Bolivia and Peru in about 1977, a street vendor with whom I'd struck up a conversation asked me how many times I'd been to the moon. Well, you know -- since the Americans had gone to the moon, all Americans traveled there regularly. Stands to reason.

I told him I'd been there three times. No sense in crushing his illusion of Yankee greatness.
Posted by Neddie at 12:25 PM 9 comments: 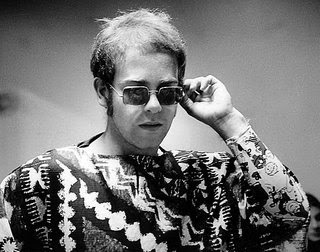 Something has bothered me about Elton John's "Rocket Man" since sometime around my fourteenth birthday, when I used my prezzie money to plunk down the necessary for a copy of Honky Chateau in that halcyon year of 1974. (He lost me with the next one, Don't Shoot Me, and by Goodbye Yellow Brick Road I wouldn't cross the street, etc. Still like Madman, though, and will occasionally pull it out for a nostalgia-binge.)

The thing that bothered me was this:

Mars ain't the kind of place to raise your kids
In fact, it's cold as hell
And there's no one there to raise them if you did

Do you see it? Does anything leap out and grab you by the throat as it does me?

If you did what?

There's no one there to raise them if you... raised them? On Mars?

Yeah, but you know what does make sense there:

"And there's no one there to raise them if you died."

One little letter, and the whole thing makes perfect sense. The rhyme-scheme doesn't demand a rhyme of "kid" and "did"; in fact there's no rhyming at all in the verses.

So what was it? How does this howler still survive? (I saw Elton singing it on my teevee recently, and he still sings it that way.)

I think it was this: It's late at night in the studio, they're cutting vocals, Bernie Taupin hands Elton a scribbled verse and then runs off somewhere. It's the Seventies, everybody's coked and Quaaluded to the tits, Elton misreads "died" as "did" (or maybe Bernie's dropped the letter in his scribble), and nobody (Seventies, remember?) stops the tape and goes whoa-whoa-whoa.

And since it's on the single and the printed lyrics on the album that way, it's set in stone. Thirty-five years later, he still sings it that way, even if it makes no sense at all.

I think a very cranky letter to Sir Elton is in the offing. Don't you?
Posted by Neddie at 11:49 AM 16 comments:

In Celebration of Bastille Day

Zoyd needed cash... from the landscape contractor Zoyd did some lawn and tree work for, Millard Hobbs, a former actor who'd begun as a company logo and ended up as majority owner of what'd been a modest enough lawn-care service its founder, a reader of forbidden books, had named The Marquis de Sod. Originally Millard had only been hired to be in a couple of locally produced late-night TV commercials in which, holding a giant bullwhip, he appeared in knee socks, buckle shoes, cutoff trousers, blouse and platinum wig, all borrowed from his wife, Blodwen. "Crabgrass won't be'ave?" he inquired in a species of French accent. "Haw, haw! No problem! Zhust call -- The Marquis de Sod... 'E'll wheep your lawn into shepp!".... Little by little he kept buying in and learning the business, as well as elaborating the scripts of his commercials from those old split 30's during the vampire shift to what were now often five-minute prime-time micromovies, with music and special effects increasingly subbed out to artisans as far away as Marin, in which the Marquis, his wardrobe now upgraded into an authentic eighteenth-century costume, might carry on a dialogue with some substandard lawn while lashing away at it with his bullwhip, each grass blade in extreme close-up being seen to have a face and little mouth, out of which, in thousandfold-echoplexed chorus, would come piping "More! More! We love eet!" The Marquis leaning down playfully, "Ah cahn't 'ear you!" Presently the grass would start to sing the company jingle, to a, by then, postdisco arrangement of the Marseillaise --

During withdrawal, junkies report the sensation of bugs crawling under the skin. Frankly, I think they're whining whelplings, and should shut the hell up until they've had bugs literally crawling under their skin. Sweet Jesus on a Segway, is this miserable.

We've sought attention from Medical Science, and treatment is quite trivial. A lotion, applied once head to toe, stops the little bastards in their (non-figurative) tracks. The pharmacy was out of stock of this miracle potion yesterday (a situation that drew howls of protest from we sufferers), but they attest they have replenished their stocks today. Not one hyperpruritic minute too soon.

So if one with rabies can be said to be "rabid," can one with scabies be said to be "scabid"? Apparently not; the term of art is "scabietic" -- yet another example of the perfidiousness of the Mother Tongue.

Tune in next week, when some other goddamned nineteenth-century affliction will be upon us. Will it be impetigo? Rheumatism? Chilblains? Ricketts? Only a cruel and capricious Creator knows...

Now excuse me, I've got some itching to do.

Update, 7/17: Treatment seems to have been 100% effective. Itch gone, lesions fading. Thank the Flying Spaghetti Monster for insecticides.
Posted by Neddie at 10:03 AM 10 comments:

On Taking Advantage of a Four-Day Weekend When Independence Day Falls on a Thursday, Or How We Avoided the Headaches of a Complicated Wedding

Conversation between myself and Wonder Woman, morning of Friday, July 5, 1991...

Me: Why don't we go to the Justice of the Peace in Upper Marlboro and get married?

Best idea we ever had.

September of 2010, we will have been a couple in some form or another for thirty years. Imagine that.
Posted by Neddie at 3:00 PM 9 comments: 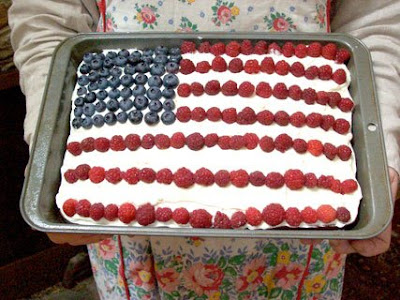 (All decorations home-grown. Wonder Woman wears her grandmother's apron for Extra Zesty Authenticity! She did the stars, and I did the stripes. The Matriarch picked the berries. We're so fucking classy!)
Posted by Neddie at 2:08 PM 2 comments: