A commenter has alerted me that his malware detector was triggered by the "Santa Baby" stream.

Has anybody else had this happen?

Actual message: "my AVG malware detector sez you have a problem - probably not related to microlegs."

I can confidently say that any problem in my life has never been, and is unlikely to ever be, related to microlegs. However, I don't want to be serving up malware.

Anybody else seen this? 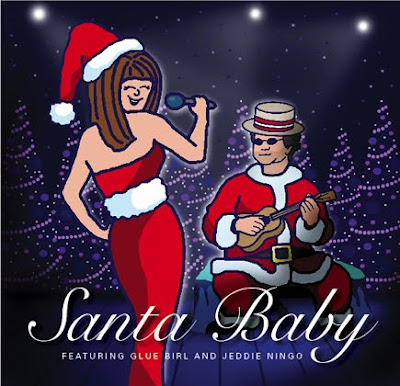 This may not impress folks in the more snow-intensive parts of the world, but for the Washington, DC, environs, this is some pretty serious snow: 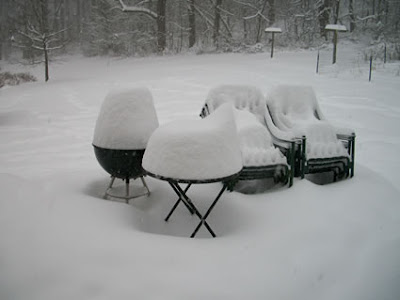 I took that a few hours ago, and it's still bucketing down out there. Won't stop till this evening.

Sammy's been like this all day, staring at Snow Teevee: 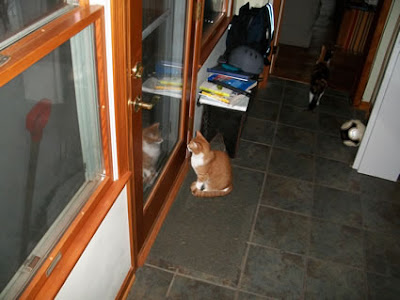 Some weeks ago, the Jingo Contingent made a trip up to Philly for a relative's wedding. We all stayed in one hotel room - we're a friendly bunch that way. On arrival, I decided to get a shower, wash off the grime from the trip.

Among the freebies in the bathroom -- the tiny bar of soap, the microscopic bottles of shampoo and body-wash -- was a little box that contained a shower cap. This is not an item I am ever likely to use, so I tossed it aside. It landed French-translation-side-up, and I guffawed.

Towel around my waist, I went back out into the main room. Freddie was watching Mythbusters. I said, "Do you know what a shower cap is called in French?" He gave me the usual withering look he displays whenever I ask him something that he obviously doesn't know. I handed him the tiny box. He chortled.

It's a douche-bonnet! How utterly wonderful! For the rest of the weekend, we called each other "douche-bonnet" every chance we got. "Dad, you douche-bonnet, you missed the turn!" "Hey, douche-bonnet -- brush your teeth."

Go ahead. Call your loved ones douche-bonnets -- affectionately, of course. Then explain you've just accused them of being a French shower cap.

I suppose we could use it to set up a system of punishments for transgressions. A shower cap kept handy to be placed on the miscreant's head -- with increments of time that increase depending on the severity of the misdeed: Put a dirty plate in the sink, wear the douche-bonnet for ten minutes. Track mud into the house, it's twenty minutes. A D on a semester report card gets you the douche-bonnet for three full hours.

"Hon, why does Ring Ting Ting have a shower cap tied to her head?"

"She got into the trash and smeared macaroni and cheese all over the kitchen floor. She knows the rules."

Tiger Woods? He's wearing that douche-bonnet for the next five years, or until he wins a major -- whichever comes first. The public douche-bonnet. The worst kind.
Posted by Neddie at 9:52 AM 7 comments:

A Brand New Phobia! Just for Me!

I seem to have picked up an interesting new phobia.

Perhaps phobia is not quite the right word. Phobias are by definition irrational. My little tic has its basis in something that, while very unlikely to happen, has happened in the past, and will likely happen again.

I have been using public transportation to commute to work. A long train ride through Maryland to Union Station in the District, and then a short Metro hop into Arlington. Pretty relaxing ride, and as long as I catch the 7:07AM out of Brunswick, I'm there in good time.

My problem is this: as Metro trains approach the station, I find myself making sure no one is standing behind me to push me in front of the train. I back away from the platform edge and make sure there are people between me and the tracks, so I'm harder to push in. And if someone should sneak around behind me while the onrushing train nears, I move in the opposite direction so he is no longer behind me.

Strange, no? During the New York years, I don't remember having this fear -- despite racking up thousands of subway hours. Perhaps it was subconsciously instilled in me after reading an article -- can't remember where -- about the guilt subway conductors feel years after having driven a train that ran over a suicide.

What was the movie where the hero saves someone who's been pushed onto the tracks by jumping in, grabbing the victim and rolling into the space under the platform just as the train passes? Seems like something a Clooney could pull off...
Posted by Neddie at 11:56 AM 13 comments: