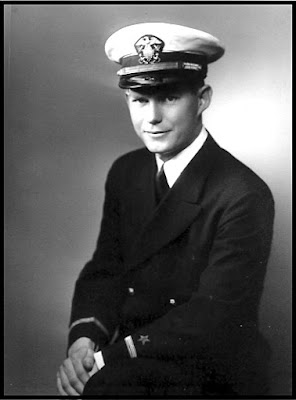 My father-in-law, Charles Chase Porter, died this afternoon of complications from Alzheimer's Disease. His death was as comfortable as these things can be. My wife, who attended him daily during his long decline, held his hand as he passed.

I remember very clearly a family gathering that took place not long after that awful disease began to take its hold on him. He always insisted that we say Grace before holiday meals, and always took it upon himself to lead the family in prayer. He always began it, "Our Heavenly Father," and then delivered some sweet little homiletic sentiment. This time, he said, "I hope we all lead lives as wonderful as mine has been, and that we always remember them."

I can't think of a more fitting tribute to the battle he fought during his declining years, a battle no one can win. He knew that his identity, his very self, was slipping away from him, becoming erased by this horrifying disease, and he had the presence of mind to tell us he hoped it didn't happen to us.

My wife called me at work this morning. She had taken our daughter with her for a quick visit to see Chase before finishing up some Christmas shopping. Wonder Woman has spent enough time with Alzheimer's patients in Chase's ward in the last three years that she knows perhaps better than many doctors the signs of the Final Days. Chase had, a day or two before, suddenly sat upright from his bed and attempted to walk. The staff were encouraging, thinking this was a sign of improvement. Wonder Woman knew better: That was just what Mrs. X had done a day before she died last September, just what Mr. Y had done on his penultimate day in March.

It was clear to her and to the medical staff that he was going to die soon. She asked me to arrange to get our daughter out of there; she didn't need to watch her grandfather die. My mother obligingly agreed to pick her up and take her to her house. I had a consultation about a root canal scheduled in an hour; when that was done, I was going to get to her side. But as I was making my way to the dental surgeon's, the phone call came. He was gone.

I went to the home. His door was closed. I knocked. Wonder Woman opened the door to me. It was just her and Chase's body. We hugged, said I love you. We sat, waiting for the Hospice-care people to come and tell us what to do next. She held his hand. She stroked his hair. She tried to get him to close his eye. She spoke to him as is he were still in there: "See? My husband's here. Somebody's going to take care of me. It's OK, Daddy. It's OK."

I'm sorry, Jeddie. Please let your wife know that we're thinking of her.

No words. No words.

2. I can see my nephew in this picture bigtime.

You both have my condolences. I understand. My wife's mother has Alzheimer's. Her mother still recognizes her but the decline is steady. It sucks.

Celebrate his life and always enjoy the many gifts he gave you and your family. I'm sure they were abundant and more precious than rubies.

Neddie - sorry, man. If there's one thing I can say it's this: the time of year may seem especially tough right now, but as the years go on, it may well be a blessing. A few years ago, we lost our family matriarch - my aunt - on Christmas Eve. It was very difficult. But now, at short remove, she comes to me at this time of year in warm memory, and it's most weclome amidst all the stress and activity of December. Peace to you and yours.

I'm so sorry for your loss.

Neddie- I am so sorry to hear about your loss... your wife's loss.

I wish I had something to say, but all I can think of, and it will mean nothing, is that I hope your healing is as painless as possible.

Sorry for your loss. Thinking of WW, you and the kids. Peace brother.

Thanks for sharing Chase's story with us, Neddie. I hope that you and your family find some measure of peace as you contemplate this loss.

Heart-renting. Neddie and Wonder Woman,all our condolences for the immeasurable loss, one which we can only imagine even with the pure and loving tribute Neddie posted.

For what it's worth, you and Charles Porter will be in our thoughts and hearts...

I had clicked "play" on "Christmas Time is Here" and then came over to your place to see what you were up to.

I am sorry for your family's loss - but I also understand that the real loss was probably a year or two ago. My mother suffers from dementia - similar symptoms. She doesn't know any of us - speaks to people who aren't there - sometimes just sits there and says "mm mm mm mm mm mm mm" for hours at a time. Very hard for all of us, because she was once witty, brilliant, soft as a flower but hard as diamonds depending on the circumstances.

I agree - celebrate his life as he would want you to.

Also - beautiful job on the tune.

My condolences to you both. I am thankful to have been spared that particular ordeal with my parents. It gives me hope to see people being so good in bad circumstances,though.

I'm so sorry to hear this. Having lost both my parents, all I can say is, cherish one another. My thoughts and best wishes are with you.

So sorry. A very fine post about a very difficult time. Best wishes to you all.

One story ends, another begins. Round goes the wheel ... I hope it spins in a favorable direction.

My condolences to you and your family. A beautiful tribute, Neddie.

Thanks for all the nice words, folks.

Wonder Woman asked me to pass along how much she appreciates the sentiments, too. We went and picked out a coffin and made funeral arrangements. He'll be buried in Arlington Cemetary in January, next to Wonder Woman's mother, who left us many years ago.

Guess why we have to wait until mid-January...? Yeah, they're a little backed up...

I'd urge you, in this giving season, to consider scribbling out a check to the Alzheimer's Foundation...

I can't tell you how sorry I am to hear about your family's loss. What a wonderful tribute.

My sympathies to you and yours, not much one can say besides that. My mom has been suffering from Alzheimer's for six or seven years now, it's a horrible thing to watch a person you love so completely go away little by little.
The story of your father in law's grace reminded me of a slip my mom made just before the signs of her illness really started. She often ended grace by saying "and make us ever mindful of the needs of others" except this one day it came out as "needful of the minds of others". It still makes me laugh and cry all at once.
Peace.

Words are not enough - so sorry for your loss.

My deepest, saddest condolences to Mrs Jingo, and to you. Bring each other strength and love every minute this difficult season.

Thanks for posting this loving tribute. Wonder Woman is the best daughter a father could ask for. She took such good care of him. And I think he knows what she did for him.

Only just read the news, Ned. My condolences to you and WW. Few things are harder for children to witness and attend than that.

I'm sure he is proud of his daughter, and you, for all that you carry on.

I just read this news, Neddie. I'm sorry. My condolences to you, Wonder Woman and the rest of your family.

I wonder if his and his fellow patients' attempts to walk was the result of something telling them that it was time to go on another journey.

My deepest sympathies for your family's loss. I'm glad you have his words to remember.

Very sorry to hear this, Neddie and WW. Here's hoping the pleasant memories of long ago soon overtake the painful feelings of loss.

Anonymous said...
This comment has been removed by a blog administrator.
10:36 PM

Anonymous said...
This comment has been removed by a blog administrator.
9:45 PM

Anonymous said...
This comment has been removed by a blog administrator.
9:45 PM

Anonymous said...
This comment has been removed by a blog administrator.
9:46 PM

we are providing ctv drama channel in Canada