An Oral Disquisition on Polymorphous Perversity 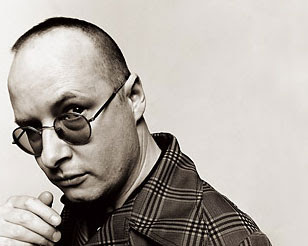 From an interview with Andy Partridge at MAGNET, where he's the current Featured Artist:

...Right, although the nearest I could get was my rubber shark story. That was my notorious way of not being unfaithful when I was on tour.

It was the best blow job I ever had! I bought it at a Woolworth’s in Melbourne, Australia, on tour. I was thinking, “How am I gonna be good?” I had an afternoon off, wandering around, and was amazed that they had a load of stuff in this store that you just couldn’t get anymore, like a time capsule or something. I saw this soft, rubber shark about a foot long and I thought, “Wow, if I stuck my dick in that, it’d feel really good, and I could be faithful and not tempted by all these women now that I’m married!” So I thought, “I’m gonna buy this rubber shark and fuck it!” I bought the shark, and it felt great. You’d get some suction going, a vacuum effect, just terrific. I used to wedge it under a cushion or a chair and I’d fuck this rubber shark. My suitcase was full at the time, so I had to buy an extra box to take it around. I had this blue fiber-board suitcase, and I’d keep this rubber shark in there. I remember going through New Zealand with it and the customs agent asking me, “What’s in the case, mate?” And I said, “Well, it’s a rubber shark.” “Wise guy.” Then he’d open it up and it’d be a rubber shark! It was great.

Did it have a name, this shark?

Not really a name. Sharky. [Laughs] Although after a while that stopped because then I’d think of Feargal Sharkey, and the last thing—literally—you want to be thinking of when you’re blowing your wad is the lead singer of the Undertones.


This is all the more amusing because I've lined up an interview with this guy next week. Stay tuned...
Posted by Neddie at 1:26 PM

Thanks for the link, though the interview does in the end get, um, amusingly sidetracked...

There was another recent online interview with Andy worth checking out. But perhaps you saw it already...

Woah, you've got a interview with Partridge?

He's got a record coming out, you know.

He'll talk to anybody.

I hate to say it, but I have a funny feeling that someday down the road a little ways, faithful fans will look back and conclude that this was the moment that Andy Partridge jumped the shark.

Nice to know my country contributed some pleasure to the XTC story. (Uh, let's just overlook Terry running off with a girl from Newcastle and thereby Yoko Onoing the band).

The Andy Patridge mashup? Send me the tapes!!!

this was the moment that Andy Partridge jumped the shark.

"cross-dressing musical Western?" I'm so there.

I think you meant 'Humped the shark'.

A band touring on th' cheap and sharing rooms actually does have to sit down and sort out wank privacy.

Get him talking about Pink Thing.

I'm pretty sire it is about a baby. Or is it about Mel Schacher?

We talking oral or cloaca?

I want to pack you up and travel round with you,
Sharkey it'll be OK.
If I could only take you from your suitcase blue,
Sharkey, what would customs agents say?

I love my commenters. Love, love LOVE them!

(I travel with a blowup noblesavage in my blue case..)

(I travel with a blowup noblesavage in my blue case..)

The Helium Kidz - "Shark in the Pool"

Well, that, being Hitherto unknown to the people of the area I live in, certainly was destined to take the place of the Mud Shark in my Mythology.

He's got a record coming out, you know.

He'll talk to anybody.

According to the accompanying photo, that's one helluva upstroke there Andy.