Just Below the Surface 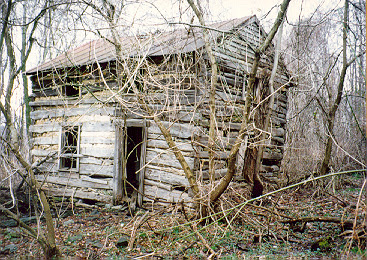 My Stratocaster went south on me a few weeks ago. The neck pickup wouldn't put out any signal, and I couldn't work out why. Time to call in a pro.

I Googled "guitar repair Purcellville" and the first return was Fairbuilt Guitars, in Neersville. This is just over Short Hill from my place. I gave a call to Marty Fair, who runs the place (and who makes some just knee-weakeningly gorgeous guitars). He told me to drop on by with the Strat.

When I got there, I was thrilled to find that Marty's residence is partly an early 19th-century one-room log cabin, much like mine. We got to talking about it; I told him I thought I could find out who'd built his place, and he said he'd love to know.

My friend Tom Bullock, who's working toward a degree in History, is engaged in an insanely detailed map of the whole region, tracing and mapping the original Fairfax land-grants in our part of the Piedmont and Shannondale districts. If anybody could come through with the name of the farmer who'd bought Marty's lot from Lord Fairfax in the early nineteenth century, it would be Tom.

Armed with this name, I began to poke around for information.

And here's where the story takes a turn toward the Seriously Weird -- and the More Than Slightly Creepy.

That cabin in the photograph at the top of this post stands maybe a quarter-mile north of Marty's place, on the western side of Short Hill. Its residents would have been the next-door neighbors of the people in Marty's place. I've known about it for a while, though I've never seen it in person; when I was researching my own place, I found an extensive Ph.D. thesis on that cabin written by one Christopher Fennel.

It was built on land owned by one Peter Demory sometime around 1803. But who built it? Well, therein lies a tale...

According to Fennel, in another, much shorter article about the place, the cabin was excavated by archaeologists some years ago, and among the usual detritus under the floorboards (nails, bits of crockery, buttons, glass, and so forth -- the usual things that literally fall through the cracks of an imperfect floor) was found this object, buried about six inches deep in the soil: 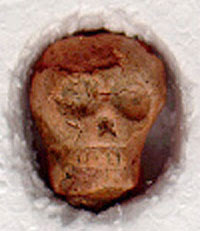 It's about the size of a marble.

Here's the back of it. The markings have been enhanced for legibility:

What a marvelously creepy little thing, don't you think?

Of the people who settled this land -- Scots-Irish and Pennsylvania Dutch, mostly -- I've always had the impression that they were rather upstanding Christian folk for whom this sort of thing would smack of idolatry. This isn't based on much hard data, just general impressions.

I have some serious rethinking to do.

Fennel's article, linked above, dismisses the idea that this might be a children's toy, a game piece, a lodge emblem that might be carried by a Freemason or an Odd Fellow, a family crest, or a memento mori. He's pretty much convinced it's voodoo. Conjure magic. The Dark Arts. Witching.

The symbology on the back of the skull is ambiguous at best. It could be an African conjuration symbol -- the Demorys, unlike most of their neighbors, did have two slaves. It could be the Cross of St. Andrew, mystically significant to the Scots-Irish who settled here. Or it could be a German symbol. But all three possibilities point to the notion that the little skull was placed there either to work a voodoo curse or to ward one off.

The last one is my favorite. Says Fennel:

The combination of an X symbol and the initials on the Loudoun skull could have served as a lethal curse or counter-charm, with the R and S on the skull figure invoking the sacred Latin text charms, and the H and D identifying the person targeted (perhaps Harry or Mahlon Demery). The symbol of the skull, and burial of the object near the target person, would have invoked the symbolism of death and fear of death.

Ja, Herr Demory, ve haff vays of making you die painfully und schlowly for running us out of our home on your miserable dirt-farm!

I feel a sudden deep-seated need to find out what happened to Harry or Mahlon Demory in the years after that talisman was buried. What was life in that particular house like? Not just, What did they eat for breakfast? -- more like, were they awakened in the night, night after night, by shit that makes The Blair Witch Project look like Goodnight Moon?

I'd also like very much to show this artefact to the upholders of the proposition that the United States is a Christian Nation, founded on pure Biblical principles by Godfearing monotheists who would never dream of hedging their bets with a little joojoo. I'd like to point out that just below the surface of the Salt of the Earth who founded this place, there beat a heart as pagan as Nero's.
Posted by Neddie at 6:00 PM

A theory: That cross on the back looks really martial to me like crossed muskets or something.

Could it have been a commemorative ring for some SEAL-like sharpshooting squad or something?

vgayohfz- read it in phonetic German.

A regimental keepsake would have been manufactured, probably stamped out of cheap brass, and many examples would be showing up on episodes of "Antiques Roadshow."

This is quite definitely handmade, out of clay, with a wire loop on the inside to hold the wet clay.

(Did you know that flick was filmed about 10 miles from here, in Burkittsvile, just over the Potomac, on the very selfsame mountain that I live on? Fact.)

Read Fennel's article, especially where he talks about the symbology of the cross and the letters: "While comparable traditions of conjuration existed among the English, there is greater evidence of the use of X symbols and the geometric patterning of initials for Latin words within the German American traditions."

I call it fuckin' voodoo.

Dude I pilgrimmaged out there before you lived there once when I was visiting.

Burkittsville is weird. There was a lady who was making and selling those stick dolls and she was making a fortune.

I think I'm due for a viewing of The Great Film.

The Strat is healthy again, after a pickup was replaced. Never thought pickups could just die, but this one did.

It's an annoying guitar, anyway. The Floyd Rose tremelo unit and the locking nut are not conducive to my style of play.

I'd also like very much to show this artefact to the upholders of the proposition that the United States is a Christian Nation, founded on pure Biblical principles by Godfearing monotheists who would never dream of hedging their bets with a little joojoo.

They'd probably be too afraid of running into snake-handlers to come into the mountains in the first place.

Hey Neddie,
I might just be interested in the strat...I have one that I like quite abit but the 21 year old has taken a liking to it and this replecemnet might be just the thing for a budding guitarist and then I'd get my guitar back...

Hit me back at neddiejingo at aol dot com

It's a Japanese Strat, with all electronic components -- pickups, pickup switch and jack-plug -- replaced with excellent-quality aftermarket components. Single-piece maple neck -- no rosewood fretboard. Two Fender Noiseless pickups (bridge and middle) and one Seymour Duncan stacked-double-coil (humbucking) pickup in the neck position. Floyd Rose Trem and locking nut -- not my style but great for screaming dive-bombs. Built in 1989 or 90. Near-mint condition, only gigged a few times. I'll throw in the case and shipping if you'll meet those three bills I mentioned.

See, this is why I will always stick with acoustics, and I never EVER fuck with the ju-ju.

Its was quite landy blog but awesome one.