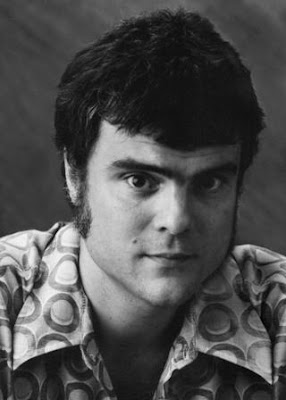 It is with great sadness that I interrupt the book-deadline-imposed Radio Silence here at Neddie Jingo to observe the passing this week of a great friend from many years ago.

Pasq Wilson (he would have loathed being remembered by me under his "real" name William Waldo) was my very good friend at Kenyon College from 1978 to 1982. We went through many adventures together, did Pasq and I. We were bandmates; we were present at the founding of both the Conscious Bugs (a thoroughly ridiculous improvisational musical troupe) and the Kenyon Peace Coalition (a rather more serious endeavor, which still survives today).

I recall with particular vividness a moment when Pasq rose to my rescue at an occasion where I failed. A long time ago, I posted in these pages a story about a visit to the Kenyon campus of the loathsome Gen. William Westmoreland. As history would have it, the visit coincided with the announcement of the resurrection of draft registration by the Carter Administration, in reaction to the invasion of Afghanistan by the Soviets. (Does history ever stop presenting us with hideous ironies? Apparently not.)

The events described in the post referred to happened exactly as I recounted them. At my side, as they did, stood Pasq Wilson.

But later that same day, as we picketed the Alumni House where the good general was staying, I was approached by a local radio reporter.He stuck a microphone in my face and demanded to know what we thought we were accomplishing with our silly picketing, our idealistic college-student posturing. This was Rush Limbaugh Radio, before that Big Fat Idiot began his odious career. The hostility dripped from his voice, the contempt, the disdain.

I was utterly speechless. I was unable to articulate. Wasn't prepared for this one. A hostile reporter. Yikes. My eyes beseeched Pasq. He rose to the occasion -- all 20 years old of him.

He leaped in front of me, protecting me. Demanded the reporter repeat his question. Absorbed it. Cogitated. Elucidated. Replied.

His answer was perfect. Utterly perfect. Absorbed the hostility, shot back with pugnacity. A rock-n-roll patriot, defending his soil. Nobody could have done it better.

Somewhere along this time, we were having dinner at the local Ponderosa Steakhouse -- paid for by Pasq; no one was more generous with found money. As we dissolved into general hilarity -- who knows if Dame Sativa or Dean Lysergos might not have been lurking somewhere nearby? -- Pasq rose to drive home his essential debating point, "Gabba-gabba-HEY!" He crashed into the hardworking busboy, sending about $200 worth of flatware and cutlery shattering across the restaurant floor.

Several Kenyon undergrads durst not show their faces in that Ponderosa for many moons after that.

Yet the point was made, and made full well: Gabba-gabba-hey!

I lost track of Pasq after Kenyon. Occasional reports might make it back to me, reports of poetical publishing ventures in New York, of tenures at the Naropa Institute under Allen Ginsburg. At each report, the inevitable conclusion would suggest itself: This is the life you were supposed to be leading. This is what, when asked your career path in junior-year high-school tests, you promised yourself you'd be doing.

Instead, I played it safe. I got the nine-to-five. I got the family path. I got the workadaddy world, where your friends don't die after "short illnesses."

Pasq lived it, everything that I enthusiastically endorsed and then avoided like a coward. The Life on the Edge.

My hat's off to you, my old friend. Thank you for rescuing me from that awful conservative-talk-radio goon. Thank you for knocking over that busboy. Thank you for everything else, too, from talking me through panic to letting me talk you though your own panic. From protector to needful supplicant, sometimes in the space of a day.

That's what friends do.

Goodbye, my friend.
Posted by Neddie at 8:22 PM

I am now listening, of course, to the Jefferson Airplane as I work on something for his memorial page.

RIP has never been a more appropriate sentiment.

Way too sincere for Port Arthur, he made his own way out, in an thoroughly plausible blend of Lord Byron and Gilbert Shelton -- 60% if each if I recall the dosage.

Anonymous: Would you mind sending me a link to that memorial page when you're done?

I'm (completely coincidentally) getting together this weekend with a few friends who knew Pasq well. I think a Viking Funeral might be in the offing. I'd like to post some photos of that event, plus some links to other commemorations. Yours would be most welcome.

What a small world. I knew Pasqual over a five year period in the late '90s when he continued the sexual revolution beyond women's lib at our favorite watering hole, The Hole in the Wall in Austin, Texas. My tribute to him then may be found by looking at the February illustration I did of him for the 25th Anniversary Calendar of the Hole in the Wall

I found By Neddie Jingo while googling Pasq(I am sure he would have laughed uncontrollably at that phrase).

I guess it is therefore appropriate that Neddie should be the bearer of the news of his passing.

BTW, the longboat is under construction as we speak. I'll bring the lighter.

I'm sorry for your loss, Jeddie.

Neddie,
My name is Frank Hubert and I have been friends with Pasq for 7 years now and will be in Beaumont this Sat. the 31st to say goodbye. He was my roommate and best friend alongside Julian Walden since I met him at The Hole in the Wall in 2001. Your story had me laughing and crying at the same time, and I hope to represent as best I can for him. My email is thegreenstars@yahoo.com; would love to hear from you...

I dip my toe into the spam filter on occasion to see what got stuck. Today yielded a msg w/this subject line: "Obit: Waldo Wilson." WTF? A few keystrokes later and I had flashed back to junior high in Beaumont. In this sea of pubescence, many viewed Pasq as the oddest of ducks. I like to believe that I saw him even then as an utter original, especially in his role as editor of the Falcon Flash. I was his erstwhile assistant editor, the beginning of a career in journalism that continues today. Lost track of him after that. It's heartening, at least, to see that Pasq continued to live his life outside convention. Farewell.

I just found out about this from our mutual friend Jenny Smith.

I knew Pasq from Naropa 1992 and onward. Pasq and I became friends and often he referred to me as a brother. I variously both loved and found his actions vile. I published his book of poetry, and typed his poems when he couldn't type or understand a computer. Later, I taught him to use the computer to at least get a word or words in edgewise. We shared points of view, and did not share points of view - but always shared something of a passion for a revolution of some sort.

Pasq, if anything, was proud and determined about his opinions. More often than not, over the years, I have figured out that he was spot on.

Pasq was not an easy person to be friends with, I think anyone who knew him well would attest to this. His manner was intense. Like his life long bought with Epilepsy, you would never know quite when to expect his convulsive intelligence to rattle your soulful endearments of him and make you think.

I loved this man, this poet. Even as I look further into what happened (I literally found out only less than an hour ago) he will be missed.

"We are all in the gutter, but some of us are looking at the stars." -
-- Oscar Wilde

Twas' a rare and wonderful fool....I wish there were more of him.


That was a strange event...it had more of the feel of a medieval French city being laid seige to by a motley collection of Huns....Visogoths...
.......take your pick!

I had never been to New Hampshire before...and as with Washington D.C....the best way to see and experience a new place is in the throng of an angry mob.........ah Paris in the Spring! (1968)

Pasq drove on that one....?! I seem to remember getting somewhat lost....near Seabrook.....but not really caring....

Firstly Neddie Jingo, LOVE your blog. Wonderful writing, great topics. I heard about Pasq in May at the P2K8/my 25th!!!!!!!! Kenyon reunion. Oh. My. God. right back atcha. Conscious bugs, wasn't I a guest performer with yall on ocassion?

I hear reports of him over the years and was really sad to hear of his passing. He was easily one of the most wonderful people I have ever known as you know I as well adored him.

There are so many memories of Kenyon that involve him (and you) I could go on for days and days. It was the four of you - John, Matthew, Pasq, you up there in OK. Restaraunts were a special place for Pasq and I distinctly remember one that we (6 or 7 of us) walked into in West Virginia en route to DC that had placemats with large airblown images of Jesus' praying hands. This went along with the clientel who were not ashamed to tell us to leave after we were lauging too hard to order. I am pretty sure we smelled kind of weird, too.

I remember the Wesmoreland thing too, and the reporter. ICK.

Thanks for the lovely article here and nice to be in touch.

Wow, I only just heard the news. Sad indeed. Pasq never had too much fun and was always a joy to be with.

Pasq used to come into Boulder in the summer for the Naropa Institute summer writing workshop, and he would hold court up on the “college hill” around 2000-2001. I got to know him over the course of two summers when I lived in Boulder, and used to hang up at this particular watering hole too, called Mamacitas.

Among the stories he told while holding court were these bawdily graphic and loudly-told sexual conquest type tales, much to the hilarity of the stoned+drunk six or so of us Regulars, but to the squirming chagrin of some of the frat boy types who also frequented the bar, so all the better!

I liked his exhuberanty-flourished tradition of honoring the Queen Mum, before she died, for the reason that she was a treasured “fag hag” (his words), and she apparently had a habit of yelling down to her elderly gay (chatting) courtesans that “When you queens are through, this Queen would like a gin and tonic!” Pasq would often buy rounds, and for this occasion he was particularly animated in doing so.

Sad to hear the news: just found out about his passing from a fellow former-Regular who knew Pasq’s “christian name” and thus properly googled him…

I knew Pasq in 6th grade. I echo what Brett said in the comment above about recognizing Pasq to be an utter original, even then. He was unforgettable. All these years later I finally searched to find out what became of him. Sounds like he had an amazing life. I'm not surprised. I wish I had had an opportunity to meet him as an adult.

That is a funny looking picture of Pasq, I knew him as a freshman at Kenyon when his hair was much longer and frizzier. He could sure hold his acid. Rumor was he was heir to an oil fortune in Beaumont, Texas.