The Past Is Not Dead

Some few weeks ago, I was invited to give a talk to Betty's high-school American History class on Loudoun County and the Civil War. This was a great opportunity for me, because it forced me to define and arrange a set of facts that I've accumulated over the last few years into a coherent narrative understandable by high-school juniors.

Now, a friend has sent me an article from a mid-Nineties issue of the (now sadly defunct) Blue Ridge Leader, and I have been smacked in the face with a lesson in how present is the past -- just what William Faulkner was talking about when he observed that "The past is not dead. In fact, it's not even past."

Let's tease that apart, shall we?

Below I reproduce a map of Loudoun County borrowed from this excellent website. (Click to enlarge.) I've fiddled with it a bit to illustrate my point.

My talk to the kids started with a simple premise: Loudoun County was, during the Civil War, a deeply divided place. The northern reaches of the county (shown in blue on the map) were settled in the early and middle eighteenth century by two main groups: Quakers, and Pennsylvania Dutch farmers down from Lancaster County. Those farmers brought with them a style of farming that hearkened back to the Old Country: Small, independent farms that could be operated by a single family.

The southern part of the county (shown in gray and red) exhibited a style of agriculture that was quite radically different. The English Cavaliers who settled it established very large plantations (essentially, huge land grants given them for various services) that needed an extensive labor force to run them. And we know what that labor force consisted of: Slaves.

Some of these plantations still exist today as historic tourist sites: Sully Plantation on Route 28 (not technically in Loudoun), and Oatlands on Route 15 south of Leesburg.

As they were not slaveowners (whether for sociopolitical reasons or religious ones), during the Civil War the people in the northern half of the county were viewed with extreme suspicion by the southern half. I've already recounted the lopsided vote totals during the 1861 referendum on secession; the northern part of the county voted against it in very nearly the same proportion as the southerners voted for it. As they were perceived as traitors, the Confederacy felt no compunction about taking whatever they felt like from them, and John Singleton Mosby' dependence on them as his breadbasket ultimately led to the Burning Raid of 1864, which left farms from Snickersville to Point of Rocks in smoking ruin.

This is what I told the kids.

Now comes this article from the Leader.

Recall that, before the Great Real Estate Collapse of the last few years, Loudoun County was one of the fastest-growing counties in the entire country. When I was a lad in Fairfax County (one county east), one could cross Baron Cameron Avenue in Reston and be in a boyhood paradise of meadows and trees and streams; we plucked crawdads out of the stream that ran through our neighborhood. Leesburg, way off west in Loudoun County, may as well have been San Francisco. The very first stirring of the Rape of Loudoun was present in Sterling Park, but mostly what stood between us and Loudoun was... nature.

That is all gone now. While western and northern Loudoun (where we live) mostly looks like this: 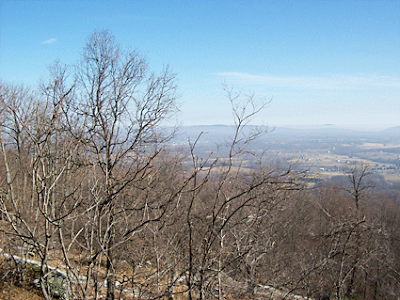 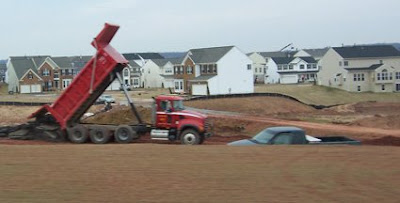 Now take a squint at that map again. I've placed a red overlay over the parts of Loudoun that look like that.

Starting to see a pattern?

Phil Bolen was the Loudoun County Administrator for twenty years from 1971 until 1991. In the mid-Nineties, he gave a talk at the East/West conference at the George Washington University Campus in Eastern Loudoun. It was reported in the Leader thus:

That Loudoun County today is divided into a western region of small towns and farms, while Eastern Loudoun is marked by huge developments is, according to Bolen, a direct result of the patterns of plantation farming that developed in the county over 200 years ago. Back then, the East was made up of large plantations of up to 1000 acres, owned by the Anglican elite. These country gentlemen were able to imitate the manorial style of English country life, only because they had slaves to work the land for them. The slave, in effect, made up the role of the peasant of old Europe who had made the manorial life there possible.

Western Loudoun, on the other hand, was settled by Quakers, Presbyterians, and Lutherans coming down from the north who rejected slavery and preferred to work small farms with the sweat of their own brows. Western Loudoun thus became a relatively populous region of small farms while the east remained sparsely populated, at least by white men who could vote....

When Phil Bolen came into office thirty years ago, Loudoun County had 24,000 residents. Today it has 115,000. By 2010, we are expected to number 218,000. [This was optimistic. Wikipedia gives the estimated population in 2007 as nearly 279,000.] The large tracts of land needed to create the massive developments to house these new residents are hard to accumulate. Developers have to buy them one by one to put together the necessary tracts. The legacy of large estates in the East, said Bolen, meant that "large tracts of land still remained relatively intact which made it much easier and cheaper to put together the large parcels of land that are required in
big time development interests."

As a newcomer to Loudon (sorry, I know the county needs more bodies like a hole in the head, but in my defense I live 1/2 mile down a dirt road from where I work) I was/am appalled by the McMansion blight. I'm not sure if it helps to know that the blight is a continuation of a historical mess or not...

Where you at, Anon? If it's a dirt road, you gotta be west of Leesburg, no?

It is very interesting that you show Wheatland in the intersection of these worlds.

In the Civil War, the Quakers in Wheatland and in Waterford really bore the brunt of being in the middle.

Today, the Loudoun County school system is attempting to buy 170 acres for a 4000 student campus in Wheatland -- in the midst of some of the most productive farmland in Loudoun.

Lovettsville's John Flannery has a good letter to the editor in the Loudoun Times about our own county driving development into the rural west.

Just checked out the Wheatland Alliance site, Dan. You have my utmost support, and if I an do anything, let me know. I was under the (I see now, mistaken) impression that the schools were going up on Berlin Pike -- because of the protest signs put up next to the Potomac Farms stand at John Wolford.

When I get a second, I'll link to the site, with a little outrage thrown in.

It is very interesting that you show Wheatland in the intersection of these worlds.The "borders" on my map are very speculative, and are based on what I can glean from the Secession Vote. And of course, there are going to be pockets of disagreement on both sides of the divide -- Goose Creek (now Lincoln) south of Purcellville being a good example.

If you haven't seen it already, and if the plight of the Waterford Quakers in the Civil War interests you, the Waterford Foundation sells a few fascinating books on the subject, including the complete Quaker Girls' newspaper, the Union News. Really indispensable for students of the topic. I've been meaning to revisit that newspaper in this blog; there's some truly great stuff in it.

Flannery, by the way, is a neighbor and a friend.

Another great post. As a transplant from Chicago, I find this local history stuff fascinating. I thought the new school property is on Berlin Tpk. It's not? Not good.

Thanks, Neddie. I've been way too deeply immersed in this for the past couple months. I practically soiled myself at the opportunity to bring it up here!

Just to clear things up, the property is on both sides of Berlin Tpke. Coming north on 287 from 9, there will be a high school to the west (left side) in the large hay field that runs from John Wolford to Nixon. On the east, there will be a middle school and an elementary school in the section starting at John Wolford up to where there are a few houses with driveways off 287.

The Quaker Girls newspaper was some of the most amazing stuff... bring on more!

I believe our road is the only dirt road left *east* of Leesburg--probably not historical though. The exact location must remain a secret lest the developers catch wind of it. We also have small houses, trees and neighbors that talk to each other...:).

"Flannery, by the way, is a neighbor and a friend."

C'mon, now. John is welcome to the cause....but John really likes the sound of his own voice.I'm glad that he's signed on to get the message out (as he has for the opposition to the PATH lines out here) but to say he "rocks" is a little too much praise.
Many good folks carried that Anti-PATH banner long before Mr. Flannery jumped onboard. Jeff Pearl, several folks down on 287 (Larsen),an absolutely dedicated couple over on Wenner -the Giorzis,as well as me.
We had all converged from a three prong attack to a single arrowhead before John even showed up. I'm recruiting PR teams this month for the www.notopath.org effort.