All the Sweet Green Icing Flowing Down 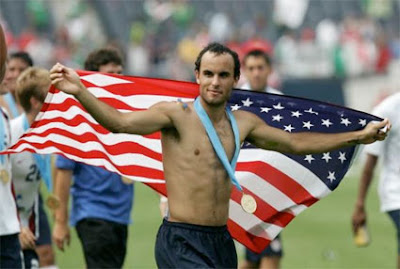 So, Landon Donovan wins the Algeria game for the U.S., sending us into the World Cup™ knockout rounds as Group C winners...

Some eight or nine years ago, for Freddie's birthday we took a party of ten-year-old boys to RFK Stadium to take in a DC United game. Like most non-major-league teams, United was very solicitous toward groups of boys who visited their stadium to learn about the game, and the birthday-party package (reasonably priced!) included field privileges before the match, in the spaces behind the goals.

These areas were, of course, roped off from the field where the players were warming up. Not being a ten-year-old boy myself, I was watching the warmups with rather more interest than that I expended on the Thunder-Stick fencing matches going on behind me. Donovan, then a mere up-and-coming youngster a year or two out of college, kicked an errant ball that came to a stop near me. I picked it up and tossed it to him as he jogged my way.

But that is not the memory of that game that I treasure the most. This is that memory:

About half-time, it came on to rain buckets. Everyone scurried up to the covered part of the stadium to wait out the torrent. As the responsible parents we are, we split the duties: Wonder Woman herded the birthday guests out of the rain, and I remained behind to pick up whatever birthday-party paraphernalia that would not survive a soaking. Carrying armloads of sweatshirts, caps, wrapped presents and the like, I glanced over and saw the remnants of the blue-frosted cake, slowly dissolving into a wet, sugary blob of goo. An idea formed in my mind.

I deposited my armloads of stuff safely in dry territory, and then went back. I lifted the platter that held the blue gooey mess, brandished it on high, looked around and made sure I had at least a small audience, and yelled up to Wonder Woman in the next section up: "Honey! Someone left the cake out in the rain!"

And she didn't even skip a beat: "I don't know if I can take it, 'cause it took so long to bake it, and I'll never have that recipe again!"

I believe I've observed this before, but it bears repeating: I married that woman for a reason.
Posted by Neddie at 12:28 PM

I don't know whether to groan or admire your good sense.