Fled to the Mountains for Safety

As I have written before, my home occupies a rather unusual place in American historical geography. Although without doubt on the Southern side of the Potomac, in an unambiguously Confederate state, it was not, during the Recent Unpleasantness the Sesquicentennial of which we are now observing, Southern in any real sense.

One of the most telling insights I've garnered since moving out here is the fact that the caprice of history can deal out some really unfair but unavoidable realities. In about the spring of 1861, if you just happened to live where I do now, in northern Loudoun County, it was actually quite unlikely that you had any slaves, that you felt particularly strongly about secession over that Peculiar Institution, or that you wanted to have your own personal blood spilled fighting for what likely appeared to you to be a Very Bad Idea indeed.

And yet, one day, because you happened to live on this side of a river and not on that side, you suddenly found yourself forced to declare yourself loyal to this brand new Very Bad Idea -- and if you refused to so declare, you were newly minted a traitor to a cause in which you didn't necessarily believe. And you were treated just so.

I'd like to try to peel this onion a little bit, because I think it's very important even now. I'm quite convinced that that Very Bad Idea hasn't been entirely -- or even partly -- snuffed out yet, even 150 years down the road, and I feel a real kinship with the unfortunates who through accident of geography found themselves on the wrong side.

Let's try this idea on for size: The part of Loudoun County I now infest raised two militias to fight in the Civil War. One was E. V. White's 35th Virginia Cavalry, a Confederate brigade with a gallant and proud record. They were the first Confederate unit to enter Gettysburg in the summer of 1863, and (I don't vouch for this; it's just local legend) it is said that their nickname, the Comanches, gave rise to the war-whoop that became the Rebel Yell.

The other unit raised here was the Loudoun Rangers, which commander Samuel Means offered to the Union. It was one of the only militias in the entire eastern Civil War theater raised on Southern soil to fight for the Union side.

I gas on about this now because a book I find very important indeed was published last year, and I have been reveling in it since I first acquired a copy last fall. Written by two Quaker-descended Waterford historians, Taylor Chamberlin and John Souders, Between Reb and Yank: A Civil War History of Northern Loudoun County tells the story the in-between folks caught on this side of that horribly arbitrary boundary created by Secession.

Now, obviously I can't tell the whole story in one blog-post -- Chamberlin and Souders take a mere 400 or so pages of closely set, two-column text to do it justice -- but I can offer up a few morsels.

I live on the eastern slope of Short Hill Mountain, at its northern end. If you strike out directly uphill from my back yard, after about 45 minutes' worth of hard slog you will crest the hill at Buzzard Rock to find a thoroughly rewarding view of Harpers Ferry. A few hundred yards south of that spot, the old Ebenezer Church road comes up and over at what is now the service road for a radio tower. I've written about this spot quite a few times, I think most memorably in this post.

Well, let's see if this passage doesn't give some of the flavor of what I'm talking about. The time is the fall of 1862. Sharpsburg -- some 7 miles north of here as the crow flies -- has only a couple of weeks before been written into out national memory. The Union Army is probing into Virginia. Lincoln is beside himself with fury at McClellan for his hesitancy in so doing. The Confederate government, meanwhile, has instituted mandatory conscription, which.... Well. Let the story tell itself:

A more modest Union sortie into north Loudoun brought relatively better results. On 4 October Lt. Wesley McGregor of the 78th New York Infantry set off from Loudoun Heights with a squad of 20 hand-picked men to scour the valley between the Blue Ridge and Short Hill. The "reconnaissance" got off to a bad start when a "squad of Rebel cavalry" seized four of McGregor's soldiers as they approached Neersville.... The following day McGregor led 18 men on a trail across Short Hill [!!!] to capture a Rebel soldier thought to be hiding on the mountain's east side. As they passed the crest, the Yankees were surprised to find a group of 30 civilians who had "fled to the mountains for safety" after failing to report to the conscription officer at Snickersville. Squads of White's cavalry were said to be looking for them.

Have I made my point? Thirty guys, camped out up there so they wouldn't be found by the 35th and forced to join their glorious ranks. I imagine not a single one of them gave a rat's about the Big Issues at stake; they had mouths to feed and trade to husband and crops to tend. They'd just been getting word of the horrifically arbitrary mangling of human flesh that had just taken place a few days before just a few miles north -- the cannon-fire of Antietam would have been clearly audible, and quite possibly the wind brought the rotting death-stench wafting in on their farm and smithies and mills.

Would you have run joyfully off to the conscription officer in Snickersville to join that horror?

I know where I'd have been. 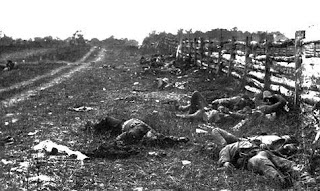 Great to have you back on the local history beat. The Very Bad Idea still animates much of the Confederate mindscape, so that even here in Upper Canada, a body shop can call itself Dixie Auto Trim and fly the hateful stars and bars unashamedly.

To avoid conscription into the Confederate army, Philip Derry crossed into West Virginia, and then upon his return, accused his wife of having an affair with the children's tutor. Oh, to have all Loudoun County's residents' stories! Love your history posts. Can't wait to read the referenced book. Just learned of Joe Bageant's death. I am so behind!

By the way, the last post was mine. Connie

I knew it was you, Connie!

You above anybody else would get a kick out of the book. I don't have my copy here at work, but tonight I'll look up "Derry" in the index and see what there is. I'm certain there'll be something -- very likely something you haven't ever heard of. I know I've been scratching my head and going "Well, I'll be damned" about once a week.

Joe's death was a contributing factor to my being too down to continue blogging. A real inspiration, that man.

Yeep! Nice goin', Neddie. They want 50 bux for the thing. Of course I've got to have it. So much for renting a girlfriend this month.

I just moved inside to my "winter" computer with a completely different set of bookmarks (neddie near the top!) and listlessly opened it expecting to find the "enquiring minds" post for the 30th time. So happy to see you back, even among the walking wounded, and doubly so to find another historical Loudoun post of the sort that got me hooked in the first place. I was afraid that we had lost you to Twitter, but would not, will not try it for any reason (fatally stupid name; harrumph!)

Frequency of posts suggests you may still be high-centered; can't really help, although I've been there, too. Had to get angry/mean/gunpowder-on-jerky pissed instead of sad and passive. Actual milage may vary. If it works, tell IOZ.

I want to know about your Triumph, even if it's just sitting and waiting. Photos would be ace. My last non-virtual friend (rebel, married to Yank from Queens - the Late Unpleastness yet abides) lives on the Snickersville pike. Where the heck is Snickersville, btw. Love riding out there but have to across the LoudFax wasteland to get there. Can they build many more mcmansions, fer chrissakes? See? The madder I get the better it feels...

Also, can you and Huck and the guys "do" Mason and Dixon. I'm re-reading (love the surveying stuff), but feel like a bunch of MALit guys could give me a leg up. Wasted my edumacation on PoliSci.

Hi, Racketmensch! Nice to hear from you!

I got hit in a parking lot by a very stupid woman who didn't see my signal. Broke my arm, and crumpled the Triumph. It now sits in the garage waiting for me to get off my ass and order the necessary parts to repair the damage. Meanwhile, I acquired a gently used modern bike -- a Kawasaki Vulcan 800. Honestly, I'm really happy with it: pushbutton start, wind screen, a reliable clutch that doesn't sprain your wrist when you shift gears.

Snickersville doesn't exist any more under that silly name. It's now called Bluemont, and is the last town you pass in Loudoun before you hit the Clarke County line. Apparently, they changed the name to attract summer tourists in the late 19th century.

Me, I don't have to cross LoudFax to get to it. One of the reasons I love it here. The Pike is one of my favorite rides in the world.

Mason & Dixon, eh? Hmmm... Interesting idea. I reread it a few years ago when I was recuperating from surgery. Google and Wikipedia had really come into their own by then, and it was a real eye-opener to read it with my laptop ready to look stuff up.