Jingosphere habitués will (one hopes) remember a post that appeared in these pages back at Thanksgiving of last year, in which Your Humble and Ob't infested, albeit fleetingly, the nesting ground of that most rarefied of avian species, the Eastern American Stinking Oofy -- the bird the local Iroquois used to call "Farts-Through-Silk."

Acolyte Treepeony brings to our attention a piece written by Philly gadfly Will Bunch (reporter for the Philadelphia Daily News who blogs at Attytood) in the American Prospect. Bunch has investigated the private and public finances of Pennsylvania junior senator Rick Santorum, finding financial shenanigans that suggest that the Senate GOP "might want to reconsider making him its ethics czar."

Besides the delicious fact that Santorum's name will live on in ways he probably doesn't relish, the babyfaced little cocksucker meant squadoosh to me personally other than as simply yet another loathesome professional hypocrite, one of hundreds to choose from.

But now I find we're neighbors.

Actually, we have to be completely accurate. The places I photographed for that post last fall were on the north side of Route 7 west of Leesburg. Santorum's subdivision is Shenstone, on the south side, where the houses, while still hilariously grandiose and out of scale, are not quite as exuberantly over-the-top. To put it another way, a United States Senator, even one mired up to his bald, wizened little scrotum in the K Street Project, has to live on the wrong side of the tracks. The ones running him: They live on Bold Venture Drive.

Here's Santorum's house. Please note that this photograph is linked to from Bunch's blog. I didn't take it. I'm happy to cop to a whole lot of sins, but stalking a United States Senator -- that I won't go down for.

I run into the pious little polesmoker at Costco, all bets are off. 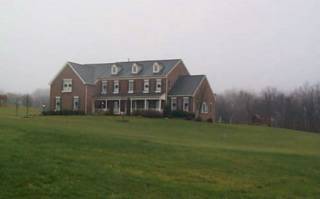 He wouldn't go to Costco -- too Democratic; makes the Wal-Mart folks angry. I see him as a Sam's Club type.

Quite the neighborhood you've got.

This story was funny enough when a Pennsylvania school district sought to recover "cyber home school" fees from him on the basis that he wasn't a resident of the state. Not to mention Santorum in 1990 using his opponent's supposed non-residency as his major campaign plank. On the TV debate, in the closing statements, waving what he said was the deed to his opponent's PA house, saying, "His name's not on it!" (His opponent's dad's name was.)

Said the poor incumbent, Just wait until he tries living apart from his wife. Of course that was before the six kids. And what did the incumbent know, anyway -- he just lived in McLean.

Anyway, that was funny enough. This is too much.

I will have to send you a picture of the house Santorum used to live in down the street from where I spent my early years, This was before he beat a decent democratic congress man named Doug Walgren on the platform that Walgren didn't even live in the district! I'm a conservative but never, ever liked or trusted this damn yankee. When he became a congressman he sold the old house and moved his family to Virginia. But "bought" a dumpy little house in Penn Hills near Pittsburgh to keep resident status . If people here could see this house they would bust a gasket . Santorum has really moved up in the world from a modest house in Mt, Lebanon Pa !