Well, I think I've learned something about myself over the last 24 hours -- namely, that I should stay the hell away from John Lennon's "Happy Xmas (War Is Over)" this year. It came on the radio while we were driving into Leesburg to pick out a coffin and make funeral arrangements for Chase, and I blubbered like a baby:

As some of you know, I've been working with Glue Birl on a little Secret Xmas Project of our own: 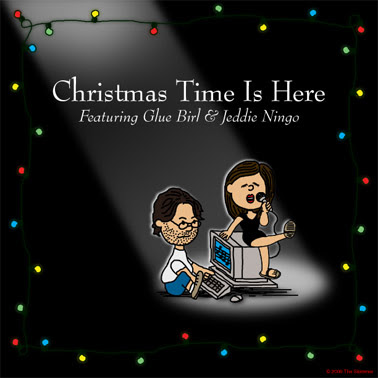 Does that Birl have some pipes on her, or what?

(Yes, examine her closely -- there she is, festooned with pipes covering ever inch of her body: tobacco, plumbing (PVC and copper), organ, |||||...)

At any rate, I hope you enjoy the tune, and the spirit in which it's offered.

Hey! Whattya tryin' to say? There ain't no PVC anywhere on me!

I ain't nothin' but the real thing.

Jeddie, you're great. And I hope things are going ok -- as good as can be expected -- with all of you over there.

Just one thing though. You think you're gonna get away with just doing just one song in 2007? Hey! Let's go for it! Let's do, like, um, 10! We'll sell Cd's and give the money to charity or something.

Let's do it. We've got nothing but time. Lucky us.

I forgot to say. There's been interest (via email to me) about how you did what you did. I think people would appreciate a post about it when you're feeling up to it.

I gave them my version...

But, that just didn't seem to satisfy them. They wanna know how *you* did what you did.

Randy Bachman has a show on CBC called Vinyl Tap, where he plays whatever he feels like.

On this year's holiday show he played the Polyphonic Spree version of Happy Xmas - had me weeping even before I came down and read your most moving previous post.

And, Neddie, is that a digital bassoon I'm hearing? Nice touch (sez the former bassoonist).

Just wanted to stop in and say thank you for the beautiful music you and Blue Girl made together.

So Happy Christmas to your near and dear ones and you too, let's hope it is a good one.

Maybe next year the war will be over!! Can I join the choir?

My first wife usually started playing Christmas music in July, and was a major Peanuts fan to boot, so I'm intimately familiar with the original.

This is a sublime rendition, Neddy. You and BG (GB? lol) have a fantastic dynamic goin' on, and I hope you do share more creations in the (near)future.

Thank you muchly and my sympathy for the loss of your Father-in-Law.

Merry Christmas to you and yours, Neddie. :)

PS, you and BG better start work now, because I'm expecting an entire album to be ready by next November.

I shall have to return home before I can listen to the obvious gloriousness involved.

Well done Neddie & Blue Girl! That tune's been a favorite of mine for ages.

My sincere condolences, btw, on your family's loss. You mentioned your father-in-law earlier this year in a comment on my blog, so I knew he wasn't well.

Alzheimer's has taken a heavy toll on my family as well. I remain confident that scientists will overcome this and many other major diseases within our lifetimes (so long as we empower them to do so, that is).

You're right, Ms. Blue does have quite the voice. Very Ella. I hope your holidays went well, such as they were, and for what it's worth you have my deepest sympathies regarding your loss.

Blue Girl does, indeed, have an excellent voice.

I would hack through a Woodstock Nation's worth of War-On-Xmas-obsessed fundies with a blunt machete to be in that choir. Alternatively, I could make a side trip the next time I'm visiting my girlfriend in North Carolina.

Oh my god... I just looked over at your sidebar and noticed your headlines form the steps of the Noble Eightfold Path. I am seriously impressed.

I'm not the best practicing Buddhist in the world, but I do try with all of my heart.

Lovely. Really well done, and that birl's in fine fettle.

You maybe shoulda dubbed in some audience applause at the end, unless you're just as happy with the written variety.

Spc. Freeman: We all can but try.

And thank you for your service to our country.

And thanks to everybody else. Happy Belated Xmas to all of you.

I'm still playing "ketchup" with blogs all over. Finally had a quiet moment to listen. Excellent. BG really can sing! Must have been the sympathetic accompaniment.

The history of perfume goes back to Egypt, although it was prevalent in East Asia as well. Early perfumes were based

on incense, not chemicals, so aromas were passed around through fumes. The Roman and Islamic cultures further

refined the harvesting and manufacturing of perfumery processes to include other aromatic ingredients.

Thus, the ancient Islamic culture marked the history of modern perfumery with the introduction of spices and herbs.

Fragrances and other exotic substances, such as Jasmine and Citruses, were adapted to be harvested in climates

outside of their indigenous Asia.