The Bunny Man: Ned Ludd of the Exurbs 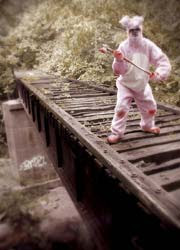 This morning a friend, citing my near-pathological loathing of the exurbs mushrooming in the farthest reaches of the Washington metro area, sent me a link to a truly strange and compelling story.

There exists among the schoolchildren of the Washington area the urban legend of The Bunny Man. It tells of a deranged killer who escaped long ago from a local mental institution; this person's particular mania manifested itself first as an obsession with rabbits -- locals reported finding hundreds of butchered and skinned rabbit carcasses -- and later with the adoption of a bunny-rabbit costume, worn while wreaking murderous havoc among, oh, you name it: lovers parked in cars, children lost in the woods, solitary motorists -- the usual urban-legend fare. His ghost is confidently reported to return every Halloween night to a certain bridge between Clifton and Fairfax Station his foul murders to perform -- making the bridge, naturally, a favorite "I-dare-you" spot for intrepid local teens.

I hadn't ever heard this legend -- though born on K Street, I grew up far from here and spent only brief periods here during my years of susceptibility to urban legends. However, this afternoon I mentioned this story to a young designer I work with, and he immediately knew what I was talking about: "Oh! That's the Bunny Man. Everybody who grew up here knows that one!"

A local librarian, Fairfax County Public Library Historian-Archivist Brian A. Conley, decided to investigate this legend and see if he couldn't find a source for it. The link my friend sent me this morning is the story of his investigation.

I'll spare you the details of the librarian's story (you can read the whole thing here -- and trust me, it's a fascinating one), save to say that he did trace the legend to a pair of reports that appeared in the Washington Post in October of 1970. In the first story, a man in a bunny costume appeared out of nowhere on Guinea Road in Fairfax, accused the car's occupants of trespass, and heaved a hatchet through the car window. No one was harmed. The second story states:

A man wearing a furry rabbit suit with two long ears appeared — again — on Guinea Road in Fairfax County Thursday night, police reported, this time wielding an ax and chopping away at a roof support on a new house....

Thursday night's rabbit, wearing a suit described as gray, black and white, was spotted a block away [from the location of the first incident] at 5307 Guinea Rd.

Paul Phillips, a private security guard for a construction company, said he saw the "rabbit" standing on the front porch of a new, but unoccupied house.

"I started talking to him," Phillips said, "and that's when he started chopping."

"All you people trespass around here," Phillips said the "Rabbit" told him as he whacked eight gashes in the pole. "If you don't get out of here, I'm going to bust you on the head."

Phillips said he walked back to his car to get to get his handgun, but the "Rabbit", carrying the long-handled ax, ran off into the woods.

And an Urban Legend is born...

While investigating these incidents, a county investigator was told that someone who worked at a development company had received an irate phone call from someone calling himself "the Axe Man." The Axe Man had said, "You have been messing up my property, by dumping tree stumps, limbs and brush, and other things on the property."

Look at one detail of the second story: The house the Bunny Man chopped at was new but unoccupied. Before the Second World War, Fairfax County largely resembled where I live now: Rural, sleepy, bucolic. I remember seeing a 1930s photograph of Tysons Corner -- the intersection of Chain Bridge Road and Lee Highway -- and it was... a gas station. After WWII, developers began to make inroads into the county to build homes for the hundreds of thousands of government workers who served the newly exponentially larger postwar federal government and its attendant Military-Industrial Complex. Tysons Corner is now a gigantic, hideous miles-wide morass of concrete and glass, and is home to two of the world's largest shopping malls.

Who was the Bunny Man, and what was he trying to accomplish? Sadly, we will likely never know his identity. Likewise his true motivations are known only to himself, but there are a few clues contained in the foregoing sources. On October 18 the Bunny Man accused Robert Bennett of trespassing. On October 29 the Bunny Man told security guard Paul Phillips that "You all trespass around here," and on November 4, the self-styled "Axe Man" accused the unnamed representative of Kings Park West Subdivision of dumping debris on his property. If we assume that all three incidents involved the same individual, then it appears that this young man was disturbed by the development of the area. Said development was extensive in 1970, too....

Being forced to watch helplessly while the face of your community changes around you can elicit strange behavior in some people.

Anybody have a bunny costume lying around you're not using?

(Concise summary of the Bunny Man Legend at Wikipedia)
Posted by Neddie at 7:53 PM

Wish the Bunny Man had won the battle. When I was a wild teen, living in the eastern suburbs of Sacramento, I used to ride my horse over miles of rolling foothills, with hardly any signs of civilization. The, the developers showed up. They started grading the hills, putting up their little stakes and flags ... and on the weekends, I'd come along on the horse and yank them out and ride them a long ways off before tossing them. It didn't help either. Today, those hills and wide open lands no longer exist. They're all covered with concrete, malls, houses and strip malls. Sad.
Long live the Bunny Man!

Maybe an axe was not the way to go, but I feel for the bunny - er, guy.

The big Urban Legend that festered throughout my senior school years was that of "The Welly Man". It was reported that a certain gentleman, sporting just a pair of Wellington boots and an erection, would run around the woods behind the school. Apparently that's all he did - run around with a hard-on. There was no molesting, no attacking; just the crack of twig and blur of flesh, green rubber and bobbing purple helmet.
.
I'd like to think he's still there, cruising the woods at a snail's pace in his motorised bath-chair flashing his wizened, age-diminished semi at the squirrels.
.
At least Bunny Man made the effort to dress up for his Urban Legend.

Nice post Ned. By the way, what's with Seven Corners? I mean, I've been wondering -- but don't have the topological chops to prove it -- can you actually have an intersection with 7 corners? I don't think so.

The Axe Hare of Fax Fair

A rascally cur stood grousing
Atop a high, rocky outcropping.
Bemoaning the new 'burban housing
And the honking big cars, all shopping...

On him, the scene was rousing.
So mad was he, he was hopping.

"I must defend this land!
I must preserve my borough!
This construction is too bland,
And planned it is, too thorough!

So, I've got to make my stand.
But I'll need a costume, like Zorro!"

"'Course, I'll have to wield an axe,
But I also must look cute,
So that I can tilt at empty shacks
But not be thought a brute."

"Ergo, I'll launch my sneak attacks
in a Lumberjackrabbit suit!"

I get it. You "grew up far from here and spent only brief periods here." It's those who came after you moved in that you want to keep out.
Good luck with that.

I grew up in Falls Church (right near, uh, Seven Corners), and I don't remember ever hearing about the Bunny Man. I would have been going into 1st grade the year after that incident on Guinea Road.

I do remember a weird legend that flew around elementary school, electrifying us all for one day during fifth grade. Someone had seen "the Green Man" in the woods behind the school. What was weird was how quickly this rumor traveled; soon, everybody was whispering about it, even though nobody knew who or what the Green Man was, or what seeing him/it signified.

There was a farm next to the townhouses I grew up in, the last vestige of the Old Ways. It was turned into another townhouse complex in the late '70s. I still remember when Baileys Crossroads was a simple crossroads, rather than the over/underpass it is now. There used to be a small carnival there, a tiny reminder that the place used to be the winter quartering grounds for the Ringling Bros. Barnum & Bailey Circus.

Steve: Please quote me accurately. The full sentence reads, "I grew up far from here and spent only brief periods here during my years of susceptibility to urban legends" -- meaning my childhood. I've lived here in Northern Virginia for twenty years.

I don't object to growth; it's inevitable. I object violently to unplanned growth for developers' easy profit, and the destruction of green spaces and farmland to construct shoddy, ugly, endless tract housing. And I object even more violently to local government's criminal irresponsibility in allowing sprawl to happen rather than subjecting themselves to the discipline of rehabilitating existing housing and infrastructure.

Nice bunny suit, Neddie. You could have some real Peeps fun with that. . . and the axe!

can you actually have an intersection with 7 corners?

draw a standard 3-road intersection, then add a fourth road that meets the intersection but doesn't continue through it.

or, draw a four-road intersection, but erase one of the legs.

Your mention of Tysons Corner reminded me of Robert Crumb's "History of America" (click on the link at the top or the bottom to see the second half).

If you could track WHERE the construction clearing debris was actually being dumped and who that property was deeded to, perhaps the mystery could be fully solved.

Yes, it's about a thirty eight regular, white, with attractive head mask. Write for details.

Amazingly enough, I not only lived in Kings Park West during this time but a friend and I would sneak out nights and prowl around like teenagers often would. On one particular night we crashed a girls slumber party and on our way home spotted the guy in the bunny suit walking along a sidewak with an ax. We ran for cover in a small cluster of trees and watched him from a distance. It was near the robert's road community pool. So, for whatever it's worth, there is one eye witness to attest to this strange and unusual charactor.