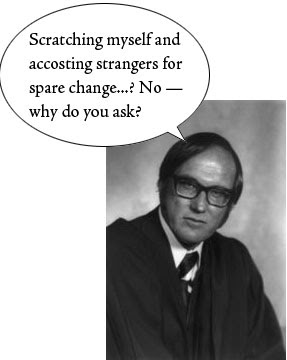 I had an unfortunate run-in with a series of kidney-stones back in the early Aughts. The first one, easily the worst and most painful, stayed with me for a couple of weeks before it could be sand-blasted out of my ureter by a surgeon. I've not had one since, owing to some easy dietary restrictions -- no more than a pound of Cheddar cheese at one sitting, simple stuff like that.

The pain from those things is utterly spectacular. I'm not about to try to compare it to childbirth, an experience I've never undergone, but you fellas will get this: Take the pain from getting a seriously good, solid, expert kick to the nuts -- with its attendant nausea, vomiting, rolling on the ground, etc. -- and move it a few inches north, into your lower back. Now imagine that that pain will not recede, as a ball-shot will, and that you know that it will be with you for hours, days -- basically, until you can get to an emergency room and the sweet, sweet relief of Sister Demerol.

Just to function in that kind of pain, you need vvbvgbvbvc w

(Sorry, I'll start that again. I'm eating a bowl of chili as I type this, and some just went down the wrong pipe and came up again, spraying all over my keyboard, which just went from ordinary finger-goo gross to Oh, my God! You regularly touch that thing? That was me, dabbing a napkin betwen the V and the B keys to fish out a chunk of kidney bean... Now, where was I?)

Just to function in that kind of pain, you need some major help in the opiates department. The urologist gave me some of the Heavy Gear they regularly shoot each other for in the streets of Des Moines. I was to take it whenever the pain threatened to come back.

Soon thereafter, I was back at work, and the phone rang. A technical developer asked me to swing by his desk to discuss a design wrinkle. As I walked down the hall, I began to feel Seriously Strange. No bats hanging from the ceiling, no Yellow Submarines floating by, but I felt extremely dislocated in time, and I was completely disconnected from my feet. I simply floated along. I reached my colleague's desk, and he began to ask his question. I stood by him, watching his head undulating in my vision, listening to his voice bubbling up from underwater, watching his hands point to things on his computer monitor, and finally becoming aware that he had stopped talking and was looking at me expectantly, waiting for my answer.

"I'm sorry, Dave," I mumbled. "I can't answer your question right now. I am way too fuckin' stoned." I went back to my desk, explained my problem to my supervisor, and went and lay down on the floor of my pod until the worst of the seasick, dizzy, overnarcotized feeling went away.

What I had done, in effect, was recuse myself from responsibility, recognizing that, in my lotus-eater's reverie, I was unable to make proper decisions. No shame in it; I was only doing what my physician had told me to do. The shit got on top of me. Then it wore off. Drugs do that.

Apparently this wisdom was not with Supreme Court Justice William Rehnquist during the years 1971-82. During this time, in which Rehnquist was addicted to a powerful (albeit nonnarcotic) sleep drug called Placidyl (what evocative names these potions have!) the court ruled on abortion in Roe vs. Wade, on obscenity in Miller vs. California, capital punishment in Furman vs. Georgia, and perhaps most historically, on whether the President of the United States is above the law in United States vs. Nixon.

And he was ripped to the tits the whole time. When he finally tried to kick the stuff in 1981, staff had to chase him down in the hospital lobby in his jammies, where he was trying to escape due to "a CIA plot against him" and "seeming to see the design patterns on the hospital curtains change configuration." The MSM is silent on the question of whether a butterfly net was employed to pluck him out of the air, but the conclusion seems inevitable.

By the time he reached this state, he was taking 1,400 milligrams of the stuff a day, nearly three times the beginning dose. Whether or not Placidyl makes one feel as I did trying to answer Dave's design question I can't say; but if it had one tenth the effect on Rehnquist, his irresponsibility bordered on the criminal.

By the way, Buried Lede Department:

The FBI file on Rehnquist, released last week under the Freedom of Information Act, reveals that in 1971, as Rehnquist's confirmation hearings for associate justice approached, the Nixon Justice Department asked the FBI to run a criminal background check on at least two potential witnesses who were expected to testify against Rehnquist. Then-FBI Director J. Edgar Hoover approved the request.

In July 1986, when President Ronald Reagan nominated Rehnquist to be chief justice, the Justice Department asked the FBI to interview witnesses who were preparing to testify that Rehnquist had intimidated minority voters as a Republican Party official in Arizona in the early 1960s. According to a memo in the Rehnquist file, an unnamed FBI official cautioned that the department "should be sensitive to the possibility that Democrats could charge the Republicans of misusing the FBI and intimidating the Democrats' witnesses." But then-Assistant Attorney General John Bolton -- who more recently served as ambassador to the United Nations -- signed off on the request and said he would "accept responsibility should concerns be raised about the role of the FBI."

And I thought Rehnquist was just mean and stupid....

Shoot, if you want to talk about the reins of power in the hands of a jonesin' man, consider a certain Chief Executive who was tweaking while the world trembled on the very brink of Armageddon. (In fact, he indulged in a nigh-Elvisian prescription drug cocktail.)

My experience with opiates is limited mostly to the codeine that I scored when I underwent an emergency root canal. I took a couple of those babies and washed them down with a cup of coffee doctored with a generous slug of brandy (yeah, I know; young 'n' stupid), and boy howdy did I float through one of the smoothest staff meetings ever. I suppose that it's a good deal that I didn't live in a country where I could score that shit over-the-counter.

I broke a collarbone playing softball some years ago. I was given Placidyl while the bone doctor attempted a closed (i.e., non-surgical) reduction of the fracture. So doped was I that I had no memory of the procedure, but I am told that I was reciting the Latin Mass. Odd, since I hadn't set foot in a church for many years, and the Latin Mass had been mouldering in the grave for 20-odd years at the time.

Oh, the attempted closed reduction was unsuccessful, so I had to have surgery anyway. But I'll always have deep and abiding respect for the mind-altering powers of Placidyl.

In 1970 I was enduring triple crises on the job, with an obnoxious neighbor and with a case of the shingles on my face and neck. Six months prior to all this my wife and I with our two small chidren in tow had moved from Atlanta to that celebrated armpit of Florida called Pensacola.
During my 3 week stay at home with the pesky shingles the wise dermatologist I was seeing wrote me a prescription for Placidyl. OMG what blessed relief. So much so that I became hooked on Placidyl and swiped a prescription blank from the doc's office.
I had no further trouble with the trashy neighbor or on the job.