Some ten years ago, Wonder Woman took a hankerin' for a puppy. She got to haunting the local animal shelters, returning home with heartbreaking tales of lost and abandoned creatures, doomed to fates of euthanasia and perhaps worse.

One day, she called me at work from the Loudoun County Shelter. "I've found him!" she breathed. "He's a pointer-lab mix, eight weeks old, and we'll name him Brown Fang!"

I allowed that this was jake by me.

"There's only one problem."

"Oh?" Me thinking, what, he's got canine herpes, transmittable to young children.

Two dogs for ten years, a parakeet, an elderly mackerel tabby, two guinea pigs, and two gerbils later, we're down to the dogs. Thinking we might be pet-responsibility-free for our Empty Nest Years.

Betty, about to turn seventeen, began following us around the house, sighing wistfully and tugging at our sleeve-hems. "For my birthday present, I wanna kiiiiittennnn..."

Monday evening found me and Betty at the Loudoun County Animal Shelter, looking at cats. Betty finds a calico kitten, about as adorable as can be, in a general category that pretty much defines the concept of adorable. I call Wonder Woman.

"We've found the kitten. There's only one problem."

So I invite you to meet the newest members of the Jingo household, fresh from the Spaying-and-Neutering Academy. Betty has chosen the names Lexie and Sam for them -- slightly baffling, I'll allow, but perfectly acceptable. 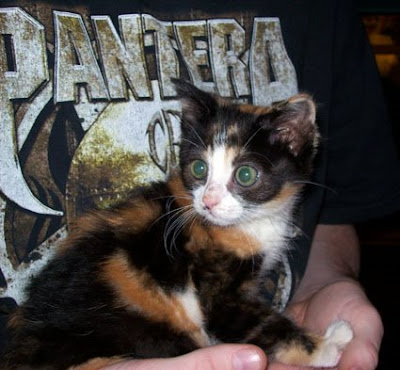 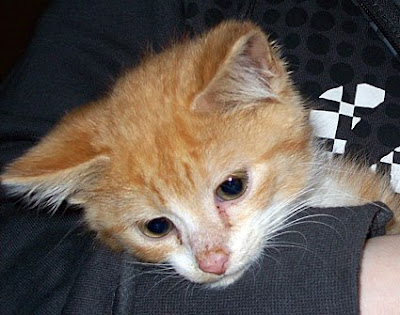 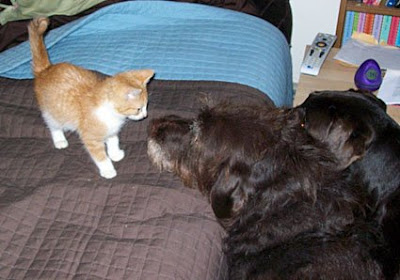 All things considered, the meeting was a peaceable one, and Brown Fang has displayed a mothering instinct that surprises no one, given that we've always suspected he's gay as a french trombone.

Somewhat later in the very eventful evening, the kittehs settled into their temporary safe-spot, the downstairs bathroom. (Until their spaying-and-neutering sutures heal, they're medically enjoined from climbing stairs.) We got them perfectly serviceable cat-beds, but they preferred the Costco box with a towel. But of course. 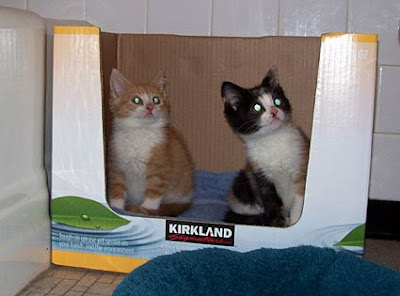 After a short time of quiet, they settled in and caught some shut-eye -- not just ordinary shut-eye; environmentally friendly shut-eye: 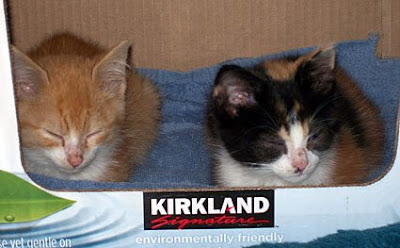 Meanwhile, upstairs in our bedroom, Ring Ting Ting and Brown Fang, who have never spent one night apart since they were born at that same Loudoun County Animal Shelter ten years ago, put on an Olympian display of their amazing skill: Symmetrical Sleeping... Happy Thanksgiving, everyone! Me, I give thanks for kittehs!
Posted by Neddie at 9:07 AM

Lexie and Sam are sooooo cute! So are Ring Ting Ting and Brown Fang, but I have a particular fondness for "kittehs."

These are nail caps that glue on to the claws and then come off when the outter layer of the claw naturally sheds about 6 to 8 weeks later. They come in a variety of colors (yay!), and having two kittens myself, I can promise you they work :) The tough bit is getting the kittens to put up with having the things put on, but if you get 'em while they're asleep, it's much, much easier.

Be sure that the kittehs remain indoor cats, as the local coyote population is fond of catmeat. Have you seen the bear this summer?

Truly cutesy kittens, Neddie. And I love the dogs. Have they had any furhter tail-sprain issues after that day at the beach. Goodness, that was a funny story!

Happy Thanksgiving to you and yours, Mr. Jingo. You have fun days ahead. And how about that: the code word today is "helion." Natch. Kittens. Heh.

I had really hoped to let these be outdoor cats. Our neighbors up the hill have quite a few cats, many of whom pretty much live outdoors. There's a regular Watership Down of rabbits in our yard who seem to be untroubled by predators of any kind -- including our dogs, who have nary an aggressive bone in their bodies. And I'd have thought cats, with the ability to climb trees, are particularly well suited to ward off predators.

I haven't seen the bear this summer. He seems to be more of a winter visitor.

Hellions, indeed, Wren. While they calm WAY down in adulthood, kittens are damned close to psychotic. In a totally cute way, of course.

I've been a foster parent for the local SPCA for years, and have raised dozens and dozens of kittens, those with and without mothers. I've gone through many 2 a.m. bottle feedings of the feline variety, and after getting thoroughly attached to kittens and their moms, I dutifully tote them back to the SPCA when they're old enough and large enough for early spay/neuter. It's gotten easier over the years to give them back, but they're still "my" furkids. One of the reasons it's become easier is that my SPCA does a thorough job of vetting adopters. Also I've had a chance over the years to meet some people who have adopted my furkids and I'm reassured that I couldn't give them a better home myself.

So I speak with some background or authority when I say Thank You for adopting these two waifs. I didn't raise 'em in anything but a theoretical sense... but thanks. You're the kind of family we hope for when we tote the babies back to the shelter. You're the family we prepare these kittens for, teaching them such valuable skills as cuddling, kneading and purring. (Shedding fur and shredding furniture are learned strictly on their own.)

I second the recommendation for the Soft Paws. All my cats wear them. I've found I have no trouble applying them by myself.

Oh, and keep us updated on the new family members.

Oooh, they are so cute! Love, love, love. Nothing like kittens!!! They are so fun to have around. And the dogs are adorable too, of course.

Jeddie, we had to move our two guinea pigs down into the basement yesterday to make room for our dinner guests. And as we were eating, I told the story about you saying that guinea pigs are like having blocks of cheese for pets. It got a big laugh!

Hope you guys had a great day yesterday and enjoy those little puffballs!

They are cute! About the cat-bed issue, I suggest lining the cat-beds with the towels -- or better yet, some or your (NJ+WW's) old clothes. See, they want something that smells like their owner....

Brown Fang has displayed a mothering instinct that surprises no one, given that we've always suspected he's gay as a french trombone.

Philosophers debate whether any statement can be categorically false; I submit "Free Kittens" as proof that one can.

I have two free kittens-- as William S. Burroughs might have said, "Those are the most expensive kittens that can be had."

So good luck with that.