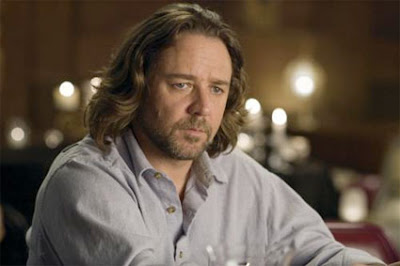 Feeling walls closing in on me earlier this week, I did what my forebears did during their own Great Depression, and hied myself off to the local outlet of the Hollywood Dream Factory for a dose of escapist fantasy. Besides a few moments' respite from worry and care, the experience revived some home truths that one needs to have reinforced every so often. For example, the first three mouthfuls of movie popcorn are delicious. Every bite after that is a whole lot like chewing a sort of styrofoam that, when swallowed, mingles with the digestive juices to produce astonishing quantities of methane. In this vein, it is a wise man who limits his intake of soda pop during a two-hour flick; it is something very akin to self-inflicted torture to be looking forward to the Big Reveal with a bladder filled beyond the bursting point.

I'll just come right out and say it: State of Play is a corking good movie in the Washington-thriller tradition of All the President's Men and Three Days of the Condor. Russell Crowe's Washington Globe reporter Cal McAffrey, an old-school print reporter of the shoe-leather-and-notebook variety, is somewhat hilariously unbelievable -- he never seems to do any actual work -- and yet we root for him because he represents the kind of gritty, in-the-know investigative reporter we wanted to be when we grew up. That this rumpled, raffish disregarder of office-rules convention never existed and, if he had, would have been summarily fired five minutes into the plot, is immaterial. He's a good dude, sticks by his friends in a scrap, and tells authority to go to hell. (You can tell he was Cool in the Sixties 'cos of his shoulder-length hair. Gives it away every time.) He's got contacts all over town -- beat cops, mortuary insiders, security-camera operators -- and he has ways of extracting arcane information that are beyond the ken of ordinary mortals. What is more, he is contemptuous of the "web side" of the Globe's operations, considering bloggers and online reporters to be lightweights and candy-asses. Even if the caricature is ridiculous, something in me likes that about him.

The plot develops at breakneck speed. When it becomes apparent that two violent deaths, seemingly completely unrelated to each other, are indeed part of skulduggery involving the US Congress and a Blackwater-like security firm with designs on privatizing the entire US security apparatus, we find ourselves leaning forward in our seats, awaiting each new development with interest. Crowe's good-dude-ishness extends toward his former college roommate (played by Ben Affleck), now an up-and-coming Congressman investigating the security firm, whose heavies appear to be offing randomly selected citizens with impunity.

In this potboiling good time, the city of my birth plays an outstanding role. These Washington movies often crack me up with their attempts to establish place by getting as many of our memorable landmarks into as many shots as possible. A key scene takes place in Ben's Chili Bowl (McAffrey is, of course, a well-known regular, popular with the staff). One is amused to see the Department of Health and Human Services at L'Enfant Plaza standing in for a Washington hospital; it seems fitting.

Unfortunately, if you know the city fairly well as I do, things can get disorienting. Early in the flick, Affleck's chippie, about to meet her doom in a Metro station, begins to wend her way to work from Adams Morgan (look! There's the Madame's Organ mural!); she turns a corner and she's in Georgetown; another corner and she's several miles away on Constitution Avenue with the US Capitol Building shining gloriously in the morning sun. If she's on her way to Capitol Hill, she's got about a four-minute walk left ahead of her; instead, she suddenly pops down into the Metro Center subway station (apparently a wormhole opened up in the space-time continuum) to meet her nemesis.

Although Washington is home to many very fine restaurants, there is no eating establishment from whose windows one may obtain that particular view of the Capitol Building. We do have fairly strict zoning ordinances here, which make it quite clear that no commercial enterprise may be built in the middle of the National Mall. It is also quite funny that McAffrey, setting up an extremely hush-hush and sensitive deep-background meeting with a contact who might be able to help him, racks his brain for a safe, out-of-the-way place where the contact would feel comfortable and safe, and comes up with the fish market at the Marina. And of course, since All the President's Men, it's been well known that all those who brave Washington's menacing and spooky parking garages (I'll admit, some of them are pretty dank) face nameless and dreadful peril. It's pretty much SOP.

Silly geographic solecisms aside, State of Play is a damned fine, dare I say old-fashioned, thriller. Ben Affleck is a bit out of his league as a congressman, but Helen Mirren and Della Frye, as, respectively, the Globe's editor and a perky young blogger, stand out. Casting Jason Bateman as a dissipated PR flack was a stroke of genius. Your money could go to worse places.
Posted by Neddie at 10:33 AM

I guess I'll add this movie to the list.

Re the phantasmagorical geography employed in these movies: Not too long ago I saw that MIT-students-break-Vegas flick. It's completely unmemorable, I can't even remember the title. Silly movie that wants to be taken seriously. (Only Kevin Spacey seems to be in on the joke that the movie's a joke.)

Anyway, you'd think MIT and Harvard Med were a few doors away from each other, a pleasant four minute walk. In reality they're quite a few smoots apart, however.

Neddie, I saw this over the weekend, and hey...no jokes... when I saw McAffrey, I thought of you! :)

Good enough recommendation. First time I became aware of the lure of cinematographic geography was in The Killing of Sister George, when Chelsea ends up a stone's throw from Hampstead. In London. England.

Interesting article on the making of this movie ... read it in the Sunday Post (yes, even though it's visibly shrinking before my eyes, still I remain faithful) back in April.