Strummin' on the Old Banjo 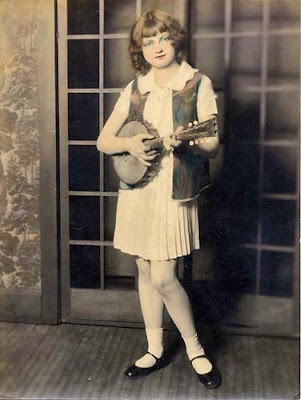 Sometimes the most puerile earworms dig their way into the cranium. This morning, driving Freddie to a doctor's appointment, I became aware that "I've Been Working on the Railroad" was buzzing around between my ears, and nothing I could do would stop it.

The first half of the song makes a fair amount of sense, I suppose -- all that tribute to labor for its own sake ("just to pass the time away," etc.). No, it's when the character of Dinah enters stage left pursued by a banjo that things get a bit surreal. Okay, we think, Dinah has a horn that the singer encourages her (at great length and with the enthusiasm borne of obsessive repetition) to blow, that much is clear. But when we learn that a mysterious "someone" is occupying the food-preparation area with Dinah while flogging a banjo (Earl Scruggs? Bela Fleck? Uncle Dave Macon? The curious mind can't help but ask), we descend into surrealism and madness. The song never identifies the musician -- itself a kind of self-aware metacommentary that we expect from a Kubrick or a Pynchon, but not from a 19th-century blackface minstrel -- but the idea of "being in the kitchen" with a woman who's been "blowing her horn" evinces a sort of eyebrow-waggling salaciousness that does the hitherto innocent work-song no credit.

I think the phrase "someone's in the kitchen with Dinah" could be rescued, refurbished, given new life and new meaning. Let's give it a shot, shall we?

"Could you possibly see your way to doing the goddamned dishes once in a while? I'm not your damned mom, and this place is a dump! Dirty socks in the sink, for God's sake! And you just sit there with that damned XBox, picking your nose! I'm going out, and this place had better be picked up when I get home, or there'll be hell to pay!"

"Well... Looks like someone's in the kitchen with Dinah!"

Or how about this:

"It's a three-one count... Beckett looks the runner back to first... Rodriguez looking for the heat, now... Rears back, pitch is on the way -- and A-Rod gets all of it! Left-centerfield, back is Ellsbury, but he won't get it.... Someone's in the kitchen with Dinah!"

"Oh that's... unnecessary... Yeah, I remember when I had my first beer... Do I come to your work and yell at you? Man -- someone's in the kitchen with Dinah!"

Funny you should bring this up. I used to wonder about this when I was listening to 'Mickey Mouse and Friends' sing their way through it. Of course, I was playing it at 78 rpm, which made it truly surreal.

I wondered if 'Kitchen' was slang for the Boiler Area on the steam train, but then read a musicology book that explained it was simply two songs that had melded together.

Look up the Wikipedia Page for it. Interesting stuff: 'Dinah' being a generic name for a Female African Slave,; and the 'Good Night Ladies' lift is blindingly obvious now it's been pointed out to me.