Those of you who have read this blog for some time may remember that I'm a little bit obsessed with strange markings that appear for no apparent reason on concrete surfaces, often in parking garages. What strange impulse led people to make these marks? It can't be that they wished to preserve their names and thoughts forevermore; if they'd wanted to do that, they'd have used a fountain pen, or possibly a Sharpie. No, what ties these mysterious graffiti together is that they are invariably executed in pencil.

A new working gig has brought me banishment to a whole new smoking venue -- a loading dock in Clarendon. But rather than stand around in the cold gawking, I have made excellent use of my time outside: I have documented the local concrete markings, with the thought in mind of subjecting them to rigorous scholarly analysis.

One would-be scribe left behind a strange combination of Arabic and Roman digits: 230.V:

Is this some form of code? Does it refer to a time? A geographic location? Perhaps it's a clue to a hidden treasure: On compass point 230, walk V steps and dig! You never know!

A lesser scholar might conclude that these markings are meaningless. Nothing could be farther from the truth! My expert eye and vast knowledge of folk art tell me that these are hobo signs left over from the Great Depression. (The fact that the garage was built in the 1990s only strengthens my argument. Because I say so, and I'm the Dad.)

If my hypothesis that these markings are indeed hobo signs is valid, then there remains only the matter of interpretation. The glyph reproduced below represents, I believe, the hobo's contempt for the building itself in which the garage is located: 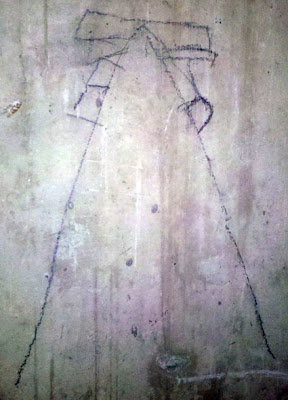 A lofty mountain with some small boxlike dwellings perched precariously at the summit. Was there ever a more piquant critique of bourgeois life than this, from a happy denizen of the road and the wide-open spaces? I think not, sir! I think not!

Squinting my eyes and cocking my head to the side, I realize it may not be a mountain after all, but an extremely primitive attempt at perspective -- a road heading to (or away from?) a distant town where all the buildings lie flat on the ground and are only about an inch tall. My conclusion still stands, though: The hobo didn't care much for civilization.

The hobo, as a race, was never among life's mathematicians. It is easy to imagine the frustration experienced by No-Count Louie the Louche while trying to perform subtraction of fractions by sheer force of will until Decimal Doc the Subtraction King came along and showed him how to convert one-fourth into 0.25: 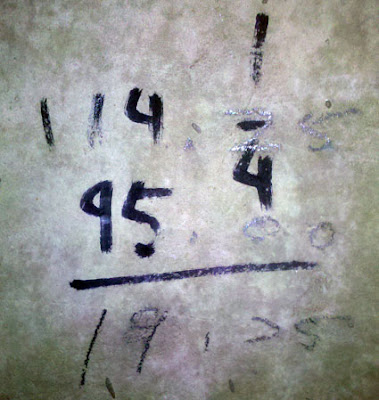 Hobo legends and lore speak of three hobo brothers, Larry, Moe, and Geoffrey the Jimson-Jiggler. The brothers each had three magical hairs that stuck straight out of their heads that gave them the powers of second sight (Beatin'-Avoidin', or just "B" in hobo parlance), prestidigitation ("Rube-Diddling," or "R"), and the ability to change the weather ("Nature-Fuckin'," or "N"). One day, Geoffrey the Jimson-Jiggler clean forgot which hair was which, and Larry and Moe, ridiculing him, labeled them for him with duct tape and cardboard, which drove Geoffrey to madness. He prestidigitated a tornado that destroyed the city of Kankakee, Illinois. No one in Kankakee remembers this because they were hypnotized by an apologetic Larry and Moe.

This is where we get the expression "get out of my hair."

Below, we are greatly privileged to see a folk-art illustration of this legend, now lost in the mists of the Great Depression: 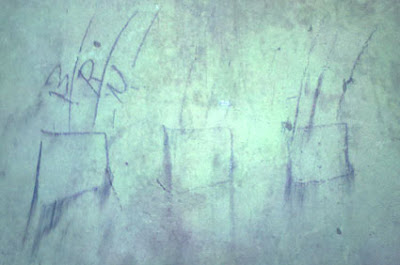 No one knows this today, but the hobos of the Great Depression were a dab hand at computer user-interface design. Granted, they did not themselves possess computers, but then again, nobody else did, either, so who's to say otherwise, eh?

Below we see a primitive but effective mockup of a three-tabbed Search module. This design would be deprecated today (modern usability testing being the cruel mistress that she is), but -- pretty good for 1934, right? 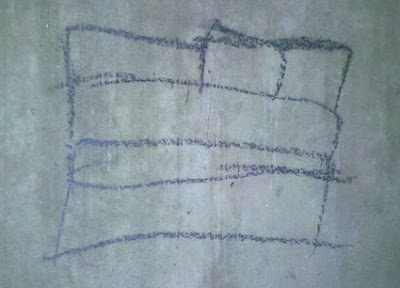 Hell, I've done worse mockups myself. With a computer.

So that's our art-history lesson for today, kids. Tune in next week for an exploration of the folk-art left on the door of the third stall on the left at the Union Station men's room.
Posted by Neddie at 12:13 PM

I'll wager that "230 V" pertains to two hundred thirty Volts, the standard for electrical service. Some electrician was marking the service entrance while the building was under construction.

Not as imaginative (nor as entertaining) as Neddie's expanation, but that's how I roll. Tiresomely pedantic.

Or you could be sharing a smoking zone with Cy Twombly.

Further to Roger's idea and climbing wearily up onto the tiresome pedant bandwagon I'm obliged to point out
R = Red
B = Black
N = Neutral
Wiring colours.
I'm also a bit curious what your new colleagues make of your behaviour?
Are they amused, bemused, or befuddled?


And you know why we use those colors, eh, Mr Smarty Pants?

Because of the hobos, that's why! Beatin'-Avoidin', Rube-Diddlin', and Nature-Fuckin'! It's amazing how much of this lost culture has permeated our "reality-based" world!

I'm just hoping they chalk my loading-dock photography up to "harmless eccentricity" goofy and not "precursor-to-psychotic-break" goofy.

I ain't no hobophobe.
I once passed a very pleasant evening sitting around the Laredo Salvation Army parking lot sharing communal smokes and a gallon of ice cream with some itinerant types. I was setting out to hitch back to Canada the next morning and they were very helpful with tips on how to jump a train if I didn't get a ride. It was a great evening.

and to this day strangers to Kankakee (k3 in local shorthand, not kkk, as some might think)still see the devastation wrought by the tornado, though the locals seem oddly oblivious to it. Further proof of the hypnotic power of moe and larry. I've been there, and it's all true.

Based on your scholarly research, Neddie, I have determined that the majority of subcontractors I have seen working on my projects are, indeed, hobos.

It does explain a lot.

I'm pretty sure the 230.00.00 refers to degrees of the compass and the V (called a "crow's foot") marks the point. You could possibly confirm if the line at the base of the V was scribed into the concrete to mark an elevation, possibly to determine the slope of drain pipes. The decimal to fractional conversion is also indicative of surveying practice, as surveyors and engineers use tenths of feet instead of inches so it would have needed to be converted for plumbers and carpenters to use.

I was a surveyor for five years, but the only thing I took away was it's cold in the winter and hot in the summer. But you can smoke whenever you want.

Raketmensch: I downloaded a compass app for my Droid, went down to the loading dock, and employed the sucker. Guess what: The dock is oriented on a line exactly at 230 degrees.

Woo! Those hobos knew what they were doing!

On re-reading the original post, I noticed you pretty much got it by intuition; "A geographic location? Perhaps it's a clue to a hidden treasure: On compass point 230, walk V steps and dig! You never know!"

I didn't like math and remember clearly saying that I would never need to know trig. On cold rainy days, we envied the hobos, but at least we could get back in the trucks. It's hard to imagine being cold for weeks at a time. Some are not bums, as such. We'd come across guys camping and working during the day for regular wages, and taking great care to hide their stuff.

The guys I spent that long ago evening with were very clear about not being bums. They worked but they worked when they chose for as long as they chose.

Surveying. Now that makes sense Neddie. I think you're off by almost a hundred years. It was done by the greatest hobo of all time, Henry D. Thoreau. Check out his self description. He left those marks for sure.

This makes me want to jump on a train and ride the rails to a new city. Full of hope and promise, and plenty of blank space for my conte crayon.