But I'm Going Naked, Sonny, in the Morning! 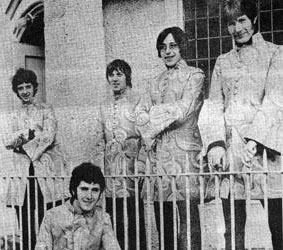 I subscribe to the newsletter of The Rocking Vicar, a very amusing weekly in which contributors reminisce Englishly about their misspent youths in the rock-and-roll trenches. The latest issue features a post from Will Birch, the genius behind late-Seventies power-poppers The Records (peace be upon them), about a device he'd bought at the now-defunct Tower Records in LA, that allowed him to slice open shrinkwrapped LPs -- a minuscule boon, perhaps, but we welcome anything that eases life's tribulations.

Another poster contributed the UK Top Ten list of albums from the day he was born, October 8, 1966, and suggests that it may very well rank as the Best-Ever Album Chart:
On that day, you could walk into your local record shop and buy at least four, arguably five or even six, of the most influential rock records evarrrr. New. Plus Herb Alpert and The Sound of Music.

So what were they putting in the water? (Wait, I think I know the answer to that...)

As for Your Humble and Obedient, I find myself still under the spell of the Nuggets II succubus*, still unable to shake the Sixties FreakBeat obsession that's been gibbering squeakily in my ear for all these months. First I feel constrained to try a cover of an obscure Swedish band's attempt at Early-Beatle-iciousness, and now this: "I See the Rain," by The Marmalade.

I was utterly gobsmacked to find out that a pop combo I'd ridiculed a few months ago as having the worst band name in the history of the world actually became The Marmalade in the mid-Sixties. Next you'll be telling me Andy Summers played in Dantalion's Chariot or something.

I think the thing that fascinates me most about the Nuggets II collection is that it proudly touts itself as hit-free. Probably the best-known track in it is Status Quo's "Pictures of Matchstick Men"; otherwise, as far as I know, none of these marvelous curiosities ever cracked a Top Ten in an English-speaking country. I remain convinced that there's as much to be learned from a period's mediocrities as from its giants.

Jimi Hendrix named "I See the Rain" his favorite single from 1967, and I imagine you'll be able to tell why once you've heard it:

Ladles and genitalmen, I give you... "I See the Rain," by The Neddie Jingo Experience, featuring Noel Redding!

Ahhh, that's what Zoot Money is up to nowdays.

Whoah - more like "I See The Music"! Cool track.

The last time you brought up Beatles Imitators Of The World, I wanted to mention one of my favorites, but got distracted. Anyways, behold the wonder that is Los Shakers, the shock troops of the "Uruguayan Invasion" of the mid-sixties.

I know someone who used to hang out with Noel Redding. I had not thought of him in years.

Bobby: For my Christmas present this year, I want to be alone with you -- just you, me, and this goddamned software compressor that I don't know how the fuck to run. You're gonna show me everything,dog.

Ben: Thanks for the vid-clip! That made my day! That tune by Los Shakers is on the Nuggets II collection, too, and it kicks major ass, in its own modest way. But can you imaging trying to cover it? 'm not sure about any of those lyrics, but the ones that I can make out I'd have trouble singing in anything but a comical Uruguayan accent.

AG: Nobody but Cynthia Plaster Caster has thought about Noel Redding in years, luv.

I'm pencilling it in. It's all in th' attack. And you can teach me about making a living wage.

Hey- here's kooky for ya- Andy Summers got Plastercasted in the '60s by whatsername. I kid you not.

She said his genitals were "perfectly formed".

Oh, and along the earlier line of this post (misspent youth of clergymen) - how about Dave Hope, of Kansas? Saw their CD/DVD retrospective, and Dave's ACTUALLY WEARING HIS CLERICAL COLLAR FOR THE INTERVIEW...