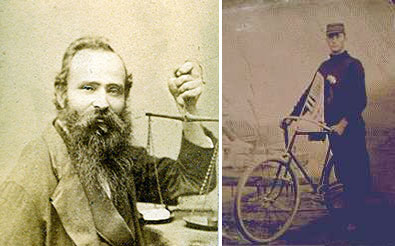 Rep. Ezra Canney-Pickham (left) and his correspondent, Elmo Trotwoodie, in the days before the scandal broke.

In the wake of the burgeoning Foley instant-message fiasco, it appears that many who would rush to defend the status quo ante take the tack that this sort of thing goes on all the time. No one at this point will be unaware that Tony Snow declared, the Monday after Foley's resignation, "I hate to tell you, but it's not always pretty up there on Capitol Hill. And there have been other scandals, as you know, that have been more than simply naughty e-mails."

Promoting the idea that wholesale institutional depravity is simply business-as-usual in Washington is, I suppose, one way of dealing with the problem. Other vested interests have pointed to the case of Democratic Rep. Gerry Studds, who was caught boffing a 17-year-old male Congressional page in 1983 -- as if this were simply a matter of balance. Congressmen bugger about thirty pages a day, it seems to suggest, and now it's simply the GOP's turn to get caught. Move on. Nothing to see here.

But that "naughty e-mails" business interests me as a student of the history of literature. The transcripts of the Instant Message conversations that ABC News released is sleazy in the extreme, not only because of their deeply icky motives, but because the conversations themselves are so depressingly banal. The Congressman even appears to reply earnestly to his victim's Away message early in one conversation, which does not exactly belie a parfait gentil knight in the Art of CyberPederasty.

It's immediately clear that the Instant Message does not threaten the Shakespearean sonnet's place in the literature of the seduction of the underaged. It's a painful harbinger of the degradation of our times to compare

A woman's face with Nature's own hand painted
Hast thou, the master-mistress of my passion

(It may be nauseatingly squalid, but this four-line exchange is also excruciatingly funny black comedy. Come on, let's admit it. I can't help but notice the ten seconds that pass between "love to slip them off of you" and the painfully nervous "haha" that follows, and the fully twenty seconds that pass between "gram the one-eyed snake" and the entirely unnecessary correction of the typo. There's a whole novel in those pauses.)

It's tempting to declare the Instant Message the doom of artistic pedophilic seduction, but in truth it's been a long, slow death. A little-remembered scandal that erupted on the American scene in 1882 has amazing parallels to the Foley case, but no one in the press or broadcast media has yet mentioned it -- despite the opportunity it presents to demonstrate Tony Snow's hypothesis.

In that halcyon year, a Democratic Congressman from Ohio's Third District, Ezra Canney-Pickham, fell hard for a Congressional page from Georgia named Elmo Trotwoodie, apparently a young man of no insignificant personal charm. After Trotwoodie, then aged seventeen, finished his period of service, he returned to his home in Goshen Villa, near Savannah. Canney-Pickham pursued his passion by means of the Instant Message of his day, the telegraph.

The correspondence attracted the attention of the local paper, the Savannah Inquisitor, and it was a matter of only a few months before the entire nation hung on its every dispatch. Below we reproduce the salient portions of the lewd exchange.

BELLE AND SELF BROKE OFF RELATIONS RECENTLY STOP ELMO


Soon after this point the Inquisitor wrote finis to the Congressman's predatory career.

Plus ça change, eh what? Let us this aphorism bear in mind while condemning Foley to hell: There but for the grace of -- no, wait a minute....
Posted by Neddie at 10:01 AM

This one will be famous.

Very very funny. I particularly like the spelled-out LAUGH OUT LOUD.

Many's the comfortable night I've spent in the old Twatleigh.....

Heyyy....went ahead and jumped on over to Golf Clubs. Some pretty snazzy product over there if I dare say m'self. All sorts of 2 Irons and 9 Woods and all that.

I'm kidding. Golf Clubs is a big douchebag. Everyone focus your hate on Golf Clubs and maybe we can make him have a anyeurism. Pop.

You know, I'd laugh but I ruptured something painful following your crack about "dear old Dennison" a few days ago.

Bow that was inspiring! :o)