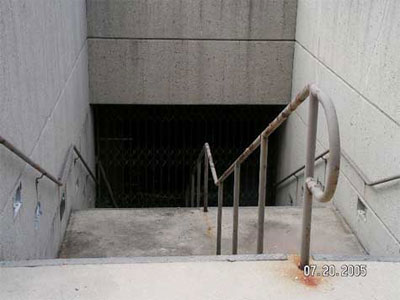 Crystal City, Virginia, is an awful place. It mushroomed into being in the early Sixties, an oppressive glass-and-concrete wart just to the south of the Pentagon, which is its reason for existence. Its main street is a six-lane highway, uncrossable by foot without grave personal danger, and no businesses or restaurants line the main road -- only chain hotels housing innumerable iron-jawed defense-contractor reps with Trent Lott hair and huge wire-rimmed glasses, in from out of town to finagle this or that bloated DOD deal on behalf of Boeing, Lockheed-Martin, Northrop-Grumann, whose logos decorate every office building. While sidewalks do exist, the residents of Crystal City are encouraged to scurry from point to point by means of a ratlike maze of underground tunnels, dank expanses relieved of fluorescent dimness only by the rare skylight and the depressing neon glow emanating from McDonalds and Subway franchises.

It would take a reward of rare value to get me to darken Crystal City's plate-glass doors, and only the availability of such a bauble explains my presence yesterday in the Conference Room of the Crystal City Marriott. Once a decade or so, I am able to wangle a paid day off -- oh, so professionally developmental, don't you know -- to catch the exquisite balance of corn and roughage served up by the magisterial Edward Tufte.

Tufte's self-published books on information design are stunningly beautiful things that are, now that I've revisited them, curiously difficult to actually read. Tufte himself projects a combination of humaneness with more than a touch of rather delicious arrogance that makes me quite grateful I'm not actually one of his students. Having spent quite some time in the info-design business myself, I found plenty to quibble with in his talk, particularly in the realm of Web design -- quite a few times I found myself resorting to the old refrain: Yeah, pal. Easy for you to say! Ivory-tower design gurus all too often betray a coldness to the predicament of the Working Stiff -- cranky clients, malfunctioning tools, comically inadequate budgets, tragically foreshortened schedules.

But his themes are indisputable and admirable. Summing up his section on the Principles of Analytic Design, he says this:

The purpose of an evidence presentation is to assist thinking. Thus presentations should be constructed so as to assist with the fundamental intellectual tasks in reasoning about evidence: describing the data, making multivariate comparisons, understanding causality, integrating a diversity of evidence, and documenting the analysis. Thus the Grand Principle of analytical design: The principles of analytic design are derived from the principles of analytical thinking.

Tufte's illustration of the masterful information-design skills of Galileo is nothing short of breathtaking: by simple and direct presentation of his astronomical observations in his texts and notebooks (that is to say, by applying Tufte's Grand Principle), Galileo gave life to the profoundly important notion that the evidence of our senses -- and the careful and unambiguous transmission of that evidence -- trumps received wisdom. Cat invented science, didn't he. It's a sad illustration of human idiocy that it took somebody until 1612 to come up with that simple idea -- and that he was put in a cage for doing it.

Tufte is particularly scathing when information-design is used to mislead, to prevaricate, to lie. I've already said my piece on PowerPoint presentations (I'm agin 'em), and much of my objection to that sack-of-shit software predates -- but is in complete agreement with -- Tufte's own essay on the topic, which is magnificent in its spleen. In his talk yesterday, he made the fairly self-evident yet tragically disregarded point that "pitching out corrupts within":

If a corporation distorts evidence presented to consumers, stockholders, and journalists, then it may soon lie to itself. Or, similarly, the chronic problem of government intelligence agencies: once the collection and selection of evidence starts to become fixed around a pre-determined policy line, intelligence agencies may become perpetually unintelligent, confused about the differences between detective work and marketing.

During the lunchtime break, Tufte signed books for queued-up punters while munching on what looked like small squares of pressboard and a bag of nuts. I lined up for an audience, but instead of Beautiful Evidence, Tufte's latest, I held my copy of Thomas Ricks' Fiasco: The American Military Adventure in Iraq. Regular readers may remember I had a few things to say about a PowerPoint graphic reproduced in its pages a few months ago. I wanted to get Tufte's comments on it, and maybe snag an amusing autograph. When my turn came, I held up the book and said, "I can't imagine no one's ever brought this book to your attention."

To my surprise, he looked a little puzzled, only half-understanding. I opened the book and showed him the PP graphic in the photo section. "Ah!" he said, "I've heard of this one, but I've never actually seen it!"

Wow. OK. I let him absorb it for a bit, and he quickly began to understand the full horror of it. I said, "It's not actually competely incomprehensible; it's a timeline, chaos on the left, order on the right and these arrows, see, they're pushing--"

He chortled. "Hah! Nothing like a little 'aimed pressure to achieve your end-state over time,' is there!"

"Great?" he sad a little sadly. Then his voice went very hard indeed. "They've only killed a couple of hundred thousand people."

He did autograph the page. I'm amused now at his refusal to include any commentary on the graphic in his autograph (people were, after all, waiting for their own audiences with the Great Man). It looks like he signed it, as one would a painting: 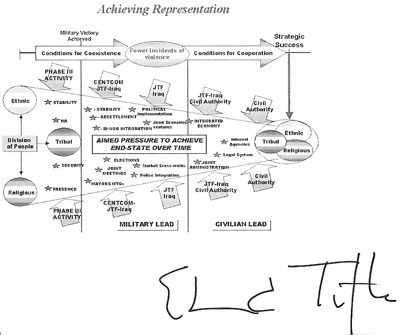 Laughing to myself over the exchange, my newly-more-valuable book back in my bag, I tottered out of the auditorium to try to find something worth eating in the rat-tunnels of Crystal City.

(Later edit: Here's an out-fucking-standing post, from somebody who appears to know what the hell he's talking about, describing just how deadly is that PPT graphic reproduced above.)
Posted by Neddie at 12:13 PM

Dammit, you lead an interesting life.

If you ever travel to Australia, be sure to leave the 60's / 70's weeping-cement horror of Canberra right off your intinerary.

Man, you really captured it. What a miserable place.

I did a Crystal City business trip earlier this year. $300+/night at that very hotel, I believe. I suggested that we stay in, say, Arlington or DC -- or even at some Northern VA Bed & Breakfast -- but my cow-orkers are afraid to take the metro.

As I recall from my legal publishing days, many litigators are infamous for producing trial graphics that distort facts. We did an article on that topic in Inside Litigation back in the mid 90s. One of the more fascinating pieces I've ever read, actually.

Good for you. It's cool you got his autograph on that.

But, dammit! You stole my company's tagline...

I'm so glad you posted that. I read somewhere that he was a big supporter of the war and it really (yes I am a geek, why?) upset me.

Dammit, you lead an interesting life.

Not to hear my kids tell it...

many litigators are infamous for producing trial graphics that distort facts.

Tufte did 15 minutes on a graphic used by the defense team in the John Gotti trial -- probably the most amusing part of his whole schtick. The purpose of the graphic -- a simple meatball chart, really -- was to point out the unsavoriness of the turncoat witnesses the Gummint called against Gotti. Damned effective bit of graphic design, no question -- but it got Gotti off.

Julia: I can't even begin to believe that Tufte ever -- ever -- supported the invasion of Iraq. I've Googled "Edward Tufte" and "Support" and "War" and found nothing to imply he ever did. Even if you showed me notarized documentary evidence with signatures and footnotes, I'd still reject the idea. The product of information design with which Tufte is most often associated -- it's practically his brand identity -- is a graphic depiction by Charles Joseph Minard of the incredible losses of Napoleon's army during the invasion of Russia -- 400,000 men down to 10,000. Tufte describes it quite movingly and passionately as the most effective antiwar protest document ever devised. I saw him say this in 1996. And he really meant it -- practically trembling in the lower lip when he said it.

Just as the history of the entire Bush Administration can be seen as a deep and mortal insult to science, it can equally be seen as an insult to information design. Tufte's entire lecture hammered at this point -- not naming names or pointing fingers, but it was abundantly clear through the whole thing that he is deeply angry at those bastards.

Beware all places with names, like Chrystal City, that feature neither aspect. Up near Minneapolis there's Eden Prairie and Golden Valley. Of course Hellish Subdivision and Sere 12-Lane would be, for all their candor, really discouraging.

Wonderful post. I've been a fan of Tufte's for years: sent most of my staff to his presentations and have all of his books.

That's great you were able to show him that graphic, which I hadn't seen either. Damn, what a mess.

Tufte was also mentioned in The New Yorker recently for giving pride of place in one of his books to a map drawn by a British doctor tracking an epidemic. Between that and this post it's clear I need to crack open his books once again. It's been too long.

Never heard of the guy. But then, I went through school before keyboarding was considered de rigeur for anyone with higher aspirations than diving into the secretarial pool. Information wasn't designed then, it was shovelled.

Back then, it wasn't PP presentations that bedevilled us; it was the postcard.

Thanks for the intro.

As to Crystal City, there's a place in my travels that I recall as being without a spot of color, just various leached shades of concrete gray.

Indianapolis. It was like a 50s film noir movie with the black and white erased. If oatmeal was left in your fridge till the mold took over, that's how it felt. Only in Indianapolis, I doubt mold would find sufficient reason to want to live.

Ha, your description of CC is exactly why I DO like the place! Can't wait to get back. I'd take it any day over the never ending NoVA mini mall....