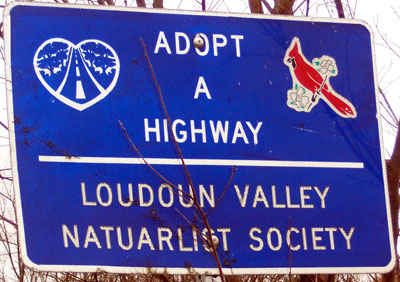 As I am one of natuar's proofreaders, this sign snagged my eye as I whizzed past it on my way home from work this afternoon. My fellow motorists were treated to the comical sight of me hippity-hopping down the side of Hirst Road in Purcellville, camera in one hand, cane in the other, dodging giant Ford F-250s to capture this lovely wild typo in its natuaral setting. There was a flap about typos being an endangered species a few years ago -- what with spell-checkers and all -- so it's good to be able to catch one in natuar before they all dye out.

Now natuarlists -- they're the naked people, aren't they? With the butt-towels and the sun-cream and the volleyball? I do hope they manage to put some clothes on while picking up trash on the highway they've adopted. All I'm saying. Kids use these roads.

I can understand a modicum of chapped-assedness among the Loudoun Valley Natuarlist Society at the woeful proofreading down at the state pen where these signs are whipped up by our brethren the Incarcerated-Americans. But that's not a patch on the irritation stirred up by the sign down on Route 28, which has apparently been proudly adopted by the Ted Nugent Untied Sportsmen of America. How many shotgun blasts can one poor road-sign take? Not many -- and that's a natuaral fact.

Your previous posts, cane references, and the well-demonstrated tendency of some conditions not to self-correct once they manifest themselves lead me to conclude that your hip troubles you yet. I recommend (having just undergone one last Friday), that you give renewed consideration to resurfacing as an alternative to total replacement. Not a panacea,and no less major of a procedure, it nonetheless deserves consideration for the potential advantages it offers to the younger subset of the hip-checked.

Dude you PROMISED me some bone for my tooth implant, dammit.

This tends to explain the unseemly bums that have been appearing along that stretch of highway recently.

I doubt that any of Sweaty Teddy's disciples were responsible for the shotgun blasts--Der Nüge favors a bow for hunting. (Fun fact: Ted's brother was, and perhaps still is (don't have the Million Dollar Directory at hand) CEO of Neutrogena. Ted lives clean! Still a complete Republican tool, though.)

wwuaydb: What Would Us Average Yahoos Do, Bwah?

Have you seen this? http://www.theonion.com/content/node/54909

Here in Shimmer City there is an Adopt a Highway sign credited to Penn & Teller. I have yet to spot them picking up cigarette butts and Coney Island whitefish.

Mark: We're making a go/no go decision on the hip in December. I haven't queried the resurfacing option with the doc yet. Can you tell me, where did you get yours done? My understanding is that the procedure's so new that it's not available everywhere -- somebody told me they're making giant strides with much less invasive techniques -- only trouble is, they're doing this in India.

There's only so far I'm willing to go.

Jesus, even hip replacements are getting outsourced to India. What's an aging, breaking-down American supposed to do?

Sure, the airfare's pricey, Neddie. But, you'll be paying in rupees for your new hip. I think the exchange rate is something like 45:1 right now (even better than when I went back in '94), so hips are probably more affordable than ever.

Ned;
I sent a reply too voluminous to fit into comments to your posted email last night. If you didn't receive it, please let me know & I will re-send. I also have documentation which I can fax if you would like. Mark