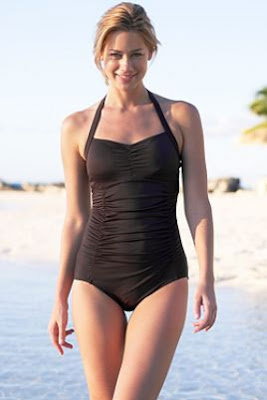 But when the Land's End Spring Swimsuit Catalog hits the Jingo mailbox?

Spread the beach-towel and break out the hand-lotion... That publication, my friends, is sexy.

It's simple, really: I can actually imagine having a conversation with these women. And really enjoying it. 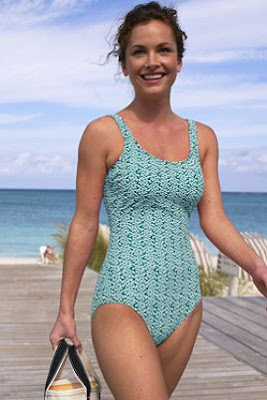 Dude, they're selling to women. 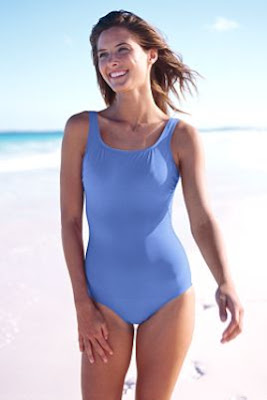 Well, yes, exactly! They're selling swimsuits to women -- women who are self-conscious about their imperfect bodies -- and the swimsuits are designed to mask those imperfections: low thigh-openings, high necklines, underwires, panels to "control" bellies that may have borne children. The models are lovely women, but lovely in a way that a female shopper might actually realistically aspire to. No heavy makeup, no gigantic bolt-on hooties, just women who happen to be particularly attractive, wearing swimsuits. Unthreatening. Real.

I find that unbearably sexy.

They're also slightly on the older side, which I find in my encroaching dotage to be a major
plus. They exude intelligence and experience. They might actually take my Dadaist sense of humor and give as good as they get. I hate it when, after a nonsequitur joke, a woman looks at me like I've just crawled out from under a rock. High-school was one long, nightmarish series of girls looking at me slantendicular and always saying exactly the same thing: "God, you're so weird!" 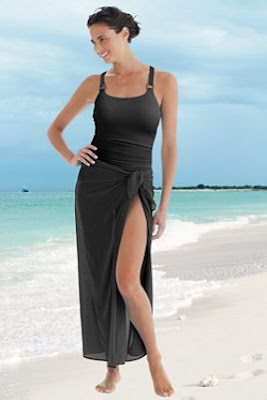 It's precisely the imperfections that are so intriguing. The smaller breasts, the wider hips, the thicker waists -- these are in fact the very things that make me imagine them to be actual human beings rather than fluffed and Photoshopped wank-objects.

No -- I'm trying to be honest. I can't get exited about an image of a sexy woman unless I can also imagine that the woman would be real enough -- human enough -- to hold an actual conversation with me. The Land's End catalog, aimed as it is at women insecure about their bodies, presents to me images of women who are unthreatening to other women. This woman-to-woman appeal, I think, is the key: I need an idealized image of female sexuality that is acceptable to actual living, breathing, menstruating, micturating, defecating, farting, spider-veined, small-breasted, square-assed, potbellied, thunder-thighed women who think that getting sand in the intimate bits of their swimsuits is funny.

No, but what's weird is your apparent fucking inability to correctly read the cover of the Lands' End catalog. They're fairly proud of that misplaced apostrophe.

To be posted soon: Neddie does the self-nasty with a copy of the AARP Bulletin.

Wot, they end lands? What a strange occupation...

The most recent issue of the AARP Bulletin is stiff and crunchy with Jingoid emanations. Pssst! Check p. 43! Grrrrowl!

Jeddie, bless your little weird heart -- it's in the right place.

And that's ok. I'm not going to let it stress me out. I'm just going to learn how to hold a cocktail *just so* at the shore.

It's all in the attitude, my weird friend.

Unknown said...
This comment has been removed by the author.
12:45 AM

At Hooter’s I’m a pussycat
For I become a salty dog
Not from pneumatic tits and twat
But from the Lands' End catalog.

Spare me your Penthouse, Hustler, Club,
No minx therein my jokes can get
A soccer mom’s my secret love
My hacker she alone can whet.

(To coax forth acts so sweet and crude
To Wallace Stevens I’ll allude.)

(Land’s End may only want to make a buck here
But damn! I’m hot for mother, f**ker.)

Neddie:High-school was one long, nightmarish series of girls looking at me slantendicular and always saying exactly the same thing: "God, you're so weird!"

Neddie, I think I love you.

Perhaps you could talk her out of them.

Why yes, you're right! Isn't that strange! And her other arm looks perfectly presentable. Perhaps she has an extra head growing out of her right elbow, and they always have to Photoshop her. Tough work, modeling. They frown on extra heads growing out of arms.

You and no one else. High-school was HELL.

Hey Ned, I'm totally with you.... The current "commercial standard" for beauty is just sick and twisted -- a caricature based on trying to reduce beauty to its component parts.

Is that so weird?

I know it isn't cool to still watch SNL, but a couple years back Jack Black was the guest host, and he did a skit where he was the Ogre who kidnapped the princess, and when the Prince came to negotiate her release, the Ogre was very cooperative.

He was saying things like, "Bring me someone that's in her mid 30's, you know someone who has some experience. And make sure she has some meat on her - Bones are for dogs! And when you take your princess home, good luck getting her to go downtown if you know what I mean.

The Viscountess, who is still a stunner at 45 is not as thin as she once was, (certainly not fat in anyone's eyes but her own) but so what? Like she says, "Not only are those waifs bony, poking you with their elbows and knees, they aren't any fun in bed otherwise. How could they be? They are always so pissed off all of the time from being perpetually famished!"

What is sexy does change with age. I'd take Joni Mitchell at 45 over Mariah Carey at 20 any day. Had you asked me that at even 30 my answer would have been different.

Personality, wit, intelligence all contribute to a woman's sensual index. To men's as well, but women are usually born with that insight, otherwise how would you and I and lots of other geek bloggers ever have found anyone as cool as Wonder Woman and The Viscountess?

Still, Sophia Loren and Grace Kelly were something even at 25, weren't they?

Moreover, I think Jane Hathaway was sexier than Ann Coulter....

GlueBirl: I've looked at the photo of our black-one-piece-and-skirty-thing again, and her feet do not actually appear to be touching the ground!

Either she's been Photoshopped into that beach, or Lands' End swimsuit models are capable of supernatural feats. Or feets.

(I'm going with the second option.)

First no WMD, now this. Jeez.

I completely get this. L.L. Bean's catalog models are much the same way. At least in the past (dunno if it's true any more), L.L. Bean used its employees as models, and there was one swimsuit model that was just... my goodness. I had such a crush on her that it actually discouraged me from wanting to go to Freeport, Maine, just in case I might run into her and she would turn out to be shallow and boring.

HOW COME THEY DON'T HAVE A CATALOG FOR SWIMSUITS THAT YOU PUT ON YOUR SOUUUUUL???????????

Actually, what makes my pink thing rise and my cartilage stiffen is this.

Umm, ouch. Glue Birl & Neddie, maybe you should skip the career in forensics. :-)

Jeddie, I already noticed that she was floating on the sand, but didn't want you to be all...

Stop dissing my perfectly sexy Land's End model, glue birl! She can float all over me any day!

I will say nothing except that I am also a subscriber.

Okay - I would add that I only wish I lived somewhere close to the real estate these pix were shot around. Not a sexy comment but there it is.

Kevin, you can't pretend to live there! Just email your picture and I'll photoshop you hovering on the sand somewhere! You pick the spot.

Not that can, Jeddie! Get your mind out of the gutter!

Adding a shadow in Photoshop is so ridiculously simple. If it had been a Photoshop job, a shadow would surely have been added. The obvious answer is that she really didn't cast one at all. Occams' Razor suggests its' so.

That wouldn't be
this razor would it?

All forensic debate aside, as a woman of a certain age I say, bless you, Mr. Jingo, bless you!

what can I say? in a recent Lands end catalog, there's a blonde woman with a towel in front of her, smiling and wearing a blue bikini that isn't brief, quite the modest suit. I wish I could see more pictures of her. She is amazing!!

It is definitely easier to buy bikini online than looking for your favorite bikini wear in a bikini store located in the marketplace. You can purchase a bikini piece online straightway from your home by logging in to http://www.verysexybikini.com and submitting your requirements. However, as soon as you place order at this website, the product would be delivered right at your doorstep at the earliest.