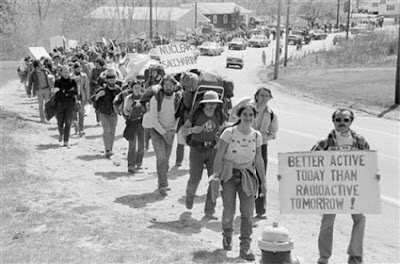 I'm in there somewhere...

I've noticed a trickle of traffic (or is it a trackle of terrific? I can never tell...) coming in from this post at Making Light. The post, about a month old, remarked that the protesters at the RNC in St. Paul were mostly (overwhelmingly) peaceful, and that a few hotheads had goaded the police into a ridiculous overreaction, repeatedly tasering peaceful protesters who were on the ground in custody, busting heads, what have you. All disgusting stuff, of course. But those hotheads... Who were they?

The link that commenter Joel Hanes left in comments was to an ancient post of mine, about Super-Joel Tornabene, the fella who was famously photographed sticking flowers into National Guards' rifle barrels at the Pentagon protest of 1967. (That post flushed out SuperJoel's brother, who popped into the comments to say hi. Good times!) Hanes' comment-with-link came in the context of a discussion of agents provocateurs, some contributors speculating that the St. Paul hotheads had been exactly that -- government-hired ringers who stir up violent trouble and give the pigs peace officers the excuse to bust some heads (or, more contemporarily, exercise their Tasers on helpless prone protesters).

That phrase, agent provocateur, stirs a memory in the Jingo cranium, the beginning of my disillusionment with leftish activism.... [Wavy dissolve lines....]

It is May of 1979 1980.* Your Ned is a sophomore at Kenyon, so idealistic that even his own parents can't stand him. I fell in with a bad crowd of other raving peacenik pinkos, forming that year a little organization we were pleased to call the Kenyon Peace Coalition.

The bugbear of those times was nuclear power (Three Mile Island was only a few months in the rearview mirror), and the KPC got a mailer from the Clamshell Alliance, organizers of a protest at the Seabrook, New Hampshire, power plant, which was under construction and very unpopular with the locals. The protest organizers were very clear: Rather than stand around the gates of the plant waving signs and looking all righteous, we were going in. We were going to occupy the plant, repel all boarders, and shut it down.

But, you know. Peacefully. In accordance with the nonviolent precepts of Ghandi and King. Consensus decision-making.

Yes, yes, I know. They were proposing what amounts to a paramilitary operation, to be carried out under principles of strictest consensus. You can smell the stupid from three decades away.

But to three eighteen-year-olds itching for our places in history, a weekend spent overthrowing the Entrenched Powers of All Kinds of Evil and Stuff -- maybe even getting our first whiff of tear gas! -- sounded like a peachamaroot of an idea. We KPC Kidz got the mandatory nonviolence training at a church in Columbus, packed up a weekend's worth of bologna sandwiches, and ho for New Hampshire.

Thus it was that on a lovely, slightly chilly spring morning in the beautiful town of Seabrook, your Ned found himself soaking wet from a police fire-hose, his bandana once soaked in lemon-juice to neutralize tear-gas but now simply soaked, chanting slogans at impassive state troopers in riot gear at the gates of the plant. One KPC Kid had gotten a faceful of Mace, but the firehose had immediately washed it away, a happenstance we thought pretty funny.

The attempt to occupy the plant earlier in the morning had been just about as pathetic as you'd expect. Since I couldn't afford to be arrested -- my Philosophy of Art finals were a week away! -- I volunteered to help form part of a human roadblock on a secondary road well away from the planned breach-point. I didn't see the main action, but I was told that perhaps three protesters had actually managed to get through a cut in the fence, promptly to be arrested. The rest of the attackers were chased away by dogs and firehoses. At our little roadblock, we saw the main body of protesters streaming away into the woods; a lone policeman with a dog began wandering down the road our way, and consensus (heh!) quickly grew that our road-blocking endeavors were pointless, discretion the better part of valor, and didn't those woods look like just the thing to melt into right about now.

Oh, we were a brave bunch of nonviolent followers of Ghandi and King!

The protest now took shape around the front gates of the plant -- just as the organizers had insisted it wouldn't -- and this is where your Ned received his first experience of a firehose (really not as bad as you'd expect). The crowd, enthusiastic at first but losing steam somewhat from the wet and cold (far worse than the firehose is what starts to happen to you ten minutes after the firehose in cool weather). At this moment, a guy -- scruffy-looking, three-day beard, much like the rest of us -- grabbed me by the elbow.

He apprised me of the situation. A schoolbus loaded with plant workers, the day shift I suppose, was attempting to enter the site, but the gate was blocked by the protesters. The crowd's enthusiasm for the consequences of blocking the workers from entering -- busted heads, dog bites, more tear gas -- had waned considerably. The mass of people parted reluctantly to let the bus pass -- in so doing conceding that this was absolutely no longer an operation to shut down the plant. Something was needed to stir the shit.

My interlocutor pressed a box of roofing nails on me. "Whatcha gotta do is, before the bus starts to move, you take some of these nails, prop 'em between the tires and the road, and blammo!"

And that, my friends, is an agent provocateur.

It didn't occur to me then -- that is, the thought, the words, "this man is trying to convince me to commit vandalism in order to provoke minor violence so that the police have an excuse to commit major violence on these people" didn't form in my head. Tear gas and fire hoses have a way of jumbling up your head after a couple of hours. But every instinct I possessed, even at the volatile age of eighteen, told me this guy was Serious Bad News -- and I am not now, nor have I ever been, much of a vandal. I shook my head no, repossessed my elbow from his grip, and wandered back into the crowd.

The bus did pass without incident, so I guess my pal didn't find any takers. Odd, how he didn't do it himself.

But that's the way they work. It just takes one tiny little incident -- and a bus with blown-out tires full of nuclear-plant workers surrounded by anti-nuclear protesters, many of whom are disappointed at not having gained access to the plant and shut it down, certainly qualifies -- to turn a manageable situation into a full-on police riot.

Update: Recalling this story has unleashed a flood of memories. On the morning of the action, I was riding in a van whose driver had volunteered to take some fifteen of us to the staging site. The town cops knew damned well what was coming, and were using any excuse to nab protesters before the thing got under way, meaning that a van full of fifteen people was a mighty vulnerable object indeed. He had us all lie on the floor.

Suddenly the driver said, "Oh, shit!" A cop car had apparently taken interest and was tailing us. The driver pulls into the parking lot of a little general store. He points to the nearest person -- me -- and says "Go in there and buy something! Look normal!"

Whistling nonchalantly, I ankle into the store, fishing in my pocket to see what I had.

I had exactly one dime. For my phone call, you see, after I'm busted. My wallet's back at the campground.

And asked for change for a dime.

Why that sort of incitement would never happen these days...
http://www.cbc.ca/canada/story/2007/08/23/police-montebello.html

oops, maybe this is easier.
http://tinyurl.com/2prexz

Does that sign say, "Nuclear Saccharine?" I'm trying to think back to those distant days of nuclear protest...but I can't figure out what the heck that might have meant.

Or perhaps somebody, perhaps a little worse for wear after ingesting those funny little purple pills we were so fond of back then, noticed a Sweet-n-Low package emitting a gentle glow, and drew the only possible conclusion that made sense.

This sounds like a scene from a Tom Robbins novel, or maybe a Coen Brothers movie. Hilarious. "Nuclear Saccharine" is a good name for an album.

Not to change the subject, but speaking of signs, did anybody catch the bizarre signs behind Chris Matthews after the debate last night? One said, "I Need A Nap," another said "Tire Swings Are Not Toys," and another said something like "Shawshank Redemption Should Have Won and Award."

Either Wikipedia's dead wrong, or I dreamed the whole thing. You're right, that I was a frosher in 1979 -- and this definitely happened sophomore year, which is my screwup (never was good with the math thing) -- but I checked the above linked info to ascertain the date. According to Wikipedia (which got the dates from this site), there wasn't another protest at Seabrook until 1986.

Funny that you should bring this up just when I was reading an article on the Australian TV Show 'The Chaser's War On Everything', who are also labelled Agent Provocateurs.

Don't really like the show myself - it seems to lack compassion and humanity and most often picks very easy targets, and there's an insufferable smugness about them which makes me think they believe they're above the concept of consequences for their actions.

This is the sort of thing they do:

I much prefer your story.

So glad I found this little trip down memory lane. I was there too with a group from NYC. It was the end of my Junior year of high school and I dropped out to attend. I remember endless meetings trying to make decisions by consensus. OMG. Your account is so accurate and funny. Eventually I got a GED and went to college. But those days were never forgotten and you described what happened very accurately.