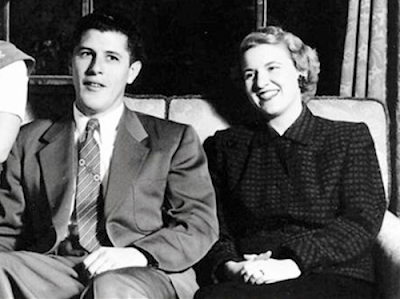 I found this photograph of Barack Obama's grandparents absolutely amazing. His grandmother, as you're no doubt aware, is poorly, and Barack is suspending his campaign Thursday to be at her side, which is as it should be. I wish the Obama and Dunham families all the best.

It's the grandfather that makes the photo so astonishing: I've shown the photo to some folks at work, asking if they could tell whose grandparents they are. None of them picked up on it until I told them, but afterwards they could easily see Barack's face in his grandfather's: the jawline, the ears, the eyes, the tilt of the head.

One of the folks I showed it to noted that the photo points up what many people miss: That Barack Obama is as much white as he is black -- he is, she said, from all of us.

I was crestfallen this morning to read of Obama's family troubles and the suspension of the campaign -- for altruistic reasons, but also for selfish ones: I was looking forward to attending the Obama rally in Leesburg tomorrow, and assumed the suspension went into effect immediately. Later, I found that he would begin the suspension on Thursday, after the rally. Yay for me, I guess.

I've seen photos of Obama's mother, Ann, when she was younger, and could see the resemblance. In one of them, it looks like she passed on her ears as well as her chin. :-) But I hadn't ever seen a photo of his grandfather. Yes indeedy, Barack Obama sure got that Dunham chin, alright.

Fingers crossed that the Leesburg rally is still on and that you get some good photos.

I wish more people would see this pic. I'm so tired of the "muslim" and "arab" accusations. Dude is straight outta Kansas.

Keep up the good work, and thanks for canvasing. L-ville is pretty progressive for the wilds of western Loudoun and I think we'll order the chicken. I know I've had my fill of the other entree.

I'll be swinging across the Potomac from MD, via White's Ferry.

His grandmother's mother's maiden name is McCurry and when you at picture from that branch of the McCurry going back generations, a lot of them have a noticeable feature that Barack Obama shares; BIG EARS!