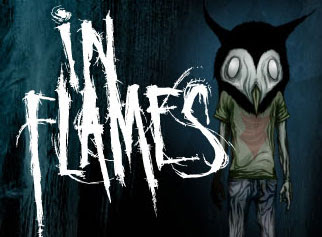 The Ram's Head Live is a great place to watch a heavy metal gig, particularly if you're a 48-year-old dad whose tastes run more to hillbilly 78s from the 1920s and early Dylan. The main concert space -- what I hear you youngsters call the "mosh-pit" -- is surrounded by little alcoves, each of which sports a fully stocked bar serving excellent microbrews. The alcove toward which I naturally gravitated faced the central hall perpendicularly, so the main force-blast of the music traveled across its opening, leaving the bar quiet enough to carry on a conversation -- or at least order another beer without having to shriek and point at a bar-pull.

The bar was tended by a trio of quite toothsome young women, one of whom remarked that she loved working this particular bar because "the Dads always sit here," and thus there is a minimum of the creepy behavior that drunk rock-n-rollers are wont to display toward a hot bartender of the female persuasion. Indeed, there were three other "Dads" (that's eunuchs to the rest of you), each nursing beers and wincing visibly every so often when double-kick-drum attacks got particularly thunderous. I took a stroll among the celebrants at one point, and the view of the mosh-pit from the balcony above did not inspire envy. One fellow with asymmetrical hair and a spade beard thrashed about the crowd with his elbows at a height best calculated to contact his fellow concertgoers in the head, and I recalled with little nostalgia the times when that young man might well have been me. I had little concern for Freddie and his friends down in the scrum; teenagers, it is well known, heal quickly from being dropped on their heads while crowd-surfing. Some even have their dispositions improved.

I wandered downstairs to view the action more closely. Noting that the staircase offered an uninterrupted view of both the stage and the crowd, I sat down on a stair. Immediately a strong light shone directly in my eyes from in front of the stage, and a beefy security type motioned my to my feet. Ah. Apparently, people throwing themselves at each other at full tilt, leaping into the air to be carried on the shoulders of pogoing youths, and lashing out with knees and elbows is all perfectly acceptable concertgoing behavior, but if you sit on the fourth stair, man -- that's a safety violation, dude, and could get us shut down by the Man!

Back at the bar after my little expedition, I realized I had the best seat in the house; not only was the noise not so deafening, but closed-circuit video monitors above the bar followed the action onstage. The first band, 36 Crazyfists, weren't to my taste at all -- thrashy, noisy, and inconsistent, with the apparent compositional philosophy that no musical idea should be sustained for more than four bars.

It was during Gojira's set that I began to warm up. I am lucky enough to speak occasionally with XTC's Andy Partridge, and something he said once really stuck with me: that the enjoyment of music arises from repetition. A listener able to predict the next beat or two and anticipate what's coming next is a happy listener; but also conversely when the composer wrongfoots the listener and changes unexpectedly, this also surprises and delights. Gojira -- apparently a French outfit -- understands this principle well; Parts of songs repeated in satisfying sorts of ways; songs had choruses and verses -- not, admittedly, in the Tin Pan Alley sense of the words, but these things were markedly present. Another point about Gojira: They clearly had a keen appreciation of the emotional appeal of the beautiful, thick, meaty, creamy overtones generated by a distorted electric guitar playing a power-chord, and knew damned well how to use them.

I saw In Flames at the concert reviewed here, when they were an opening act for MegaDeth. As an opener, I was unimpressed with them, finding them choppy and unfocused. As a headliner, though, able to stretch their set out, they were quite dazzling. Their set had dynamic flow, highs and lows, ups and downs. Most of what I found impressive about Gojira was emphasized and made central by In Flames; again, songs and arrangements had structure and agreeable flow from part to part, and there was a very appealing emotional element to Anders Fridén's singing that I hadn't expected. The lead guitar work, shared by Jesper Strömblad and Björn Gelotte, was particularly good -- at one point, I found myself thinking, as Gelotte played a solo, "Good god, he's actually carving out a melody!" -- first time I'd seen it that night.

Between sets, the boys found me at the bar -- they wanted to deposit their sodden outwear with me. Sweaty and clearly very happy, they flitted back into the crowd for another session of joyful moshing. Enjoy it while you can, kids.

Enjoy it while you can, kids.

Ain't that the truth?

Blue Kid came home from a concert the other night...

I had no idea dads were allowed into those places. And you are a lucky dad indeed if the kids knew you were there, and stayed anyway.

I've not had the opportunity to see any of those bands live, but I have a few recordings from each of them and of the three Gojira is definitely a stand-out. They are one of the few metal bands who know how to get quiet - even, dare I say, acoustic - and maintain the same level of intensity as they have when hammering palm-muted 32nd notes with the gain cranked. Their lyrical content is interesting; they tend to focus on things like the environment. They can get a bit strident, but part of it may be the language barrier. (You are correct, they are in fact French. Another rarity - the French metal band.)

Oh, and I have to give your kid cool points for willingly interacting with you inside the concert venue. I would not have been caught dead making eye-contact with my dad had he come with me to a concert. But then, I was an idiot. I would have been mortified if anyone in the concert found out I even had a dad.