An Tableau Illustrating Something of the British National Character

(Scene: in line at the ticket booth for the Powell-Mason Line Cable Trolley in San Francisco)

British Man #1, two places ahead of us, at the window: But this is disgraceful!

BM#1: Why the bloody hell can't I pay with a credit card?

BM#1: You know, we know how to do these things at home! We'd work it out so anybody could pay with a credit card! We're more civilized that way!

I realize that my last post, written in Los Angeles on our last day there, was a bit venomous, but the place angered me. Outside of (perhaps) Manhattan, I've never seen a place that draws such a blindingly clear line between those who Have and those who Do Not. On our first day in Calabasas, we went for a little exploratory drive. I observed that the surrounding hilltops had some lovely houses on them, houses that must have had a lovely commanding view of the valley. I proposed we meander into those neighborhoods to see what the view was like.

Not so fast, there, stranger. Gates. Guards. Lines of tradesmens' and gardeners' trucks awaiting the blessing of some pampered hausfrau to gain access. I worked hard so that me and mine could live on this hilltop, chum, and if you think I'm going to allow just any old riffraff to come and gawk at my stuff, you've got another think coming....

I did not gain favor with Betty by revisiting with her the plot of Poe's "The Masque of the Red Death."

Things were not helped when, later in the day, an officious biddy on a public thoroughfare informed me that smoking had been prohibited throughout the town of Calabasas, and that she was going to inform on me to the nearest gendarme if I did not immediately desist from polluting her airspace.

She was easily thirty yards away from me as she performed her righteous civic duty.

Oh, and those little microscopic dogs in handbags? 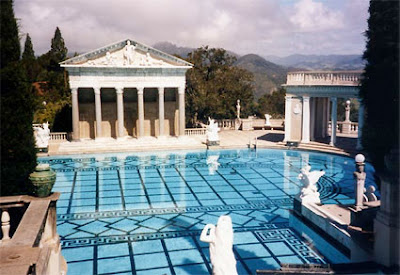 If you are able (as I was not) to suppress thoughts of the world-historical nastiness that was the professional life of William Randolph Hearst, I suppose Hearst Castle at San Simeon would be an interesting place. As it was, I could not allay the memory of an old Zippy the Pinhead cartoon that takes place at San Simeon: Looking at these impossibly, grotesquely opulent surroundings, Zippy observes, "Nice grandeur!"

That's more or less the phrase that kept going through my head too.

On the other hand, it might have been sort of fun to play tennis up there with Charlie Chaplin and Mary Pickford.

The Pacific Coast Highway did a lot to clear the venom of LA from my brain. That's one mighty pretty stretch of road. I'd like to do it on a motorbike sometime, south to north.

San Francisco, conversely, plainly did not give a rat's vagina if I lit up three simultaneous Luckies on the corner of Lombard and Van Ness. I can personally attest to the veracity of this assertion; each morning before breakfast, I walked to that well-trafficked corner, tore open a fresh pack, and stuffed three into my gob and lit them all. Not a rat's vagina was to be seen.

I can now confidently say, without fear of cavil, that I have a profound desire never to see Haight-Ashbury again.

I trusted the waiter and went with the osso buco at Firenze by Night.

Best decision I ever made.

In an otherwise flawless execution of trip-planning (the lion's share of which is directly attributable to Wonder Woman's tireless research), I made only one silly mistake; to wit, in booking the return flight, I found a reasonably priced Virgin America flight that departed SFO at 10:05 and arrived at Dulles at 6:10. Perfect!

There was only one thing wrong with that booking. I neglected to pay attention to one little detail -- the AMs and PMs that follow the posted times. Yes, I had put us on a redeye flight arriving at 6:10 in the morning.

Oh, go ahead and laugh. It will be as water off a duck's back compared to the bollocking I received from young Betty, who had to endure the flight.

I suppose I will recover from the jet-lag at some point soon. Some recommend aspirin, others epsom salts. Me, I'm thinking a few jolts of Boone's Farm chased with some crushed glass.
Posted by Neddie at 12:12 PM

Hopefully you did not have to suffer the amorous mumblings of an alcohol-infused couple in the seats behind you all the way back to IAD from SFO, like we did many years ago.

I don't suppose you stopped in at Nepenthe on your way up 1? Before Big Sur proper, and a fine, fine place to restore body and soul.

Don't feel too bad, I once booked a round trip flight to St. Lucia on a February Saturday, with return the following Friday. Only I booked for the same date in MARCH (February often having exactly 28 days, dontcha know).

Jeremy: No, I missed that, but I was utterly smacked when we passed the frickin' Esalen Institute just before Big Sur. Hadn't thought about them in years...

bollocking? How close to those Brits did you get?