Rogers & Hart: What Were They Smoking? 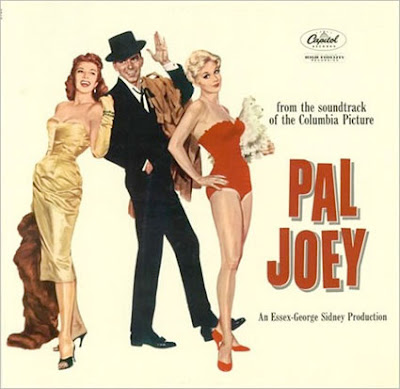 All right, let's see, here.... She gets too hungry for dinner at eight. Check. She likes the theater, and never comes late, good for her. She'd never bother with people she'd hate. Well, who would?

What the hell about any of the foregoing means that the lady is a tramp?

Doesn't like crap games with barons or earls. Disciplined of her, I'll grant -- and, frankly, some of the worst cheaters at dice I know of are of the noble caste. Won't go to Harlem in ermine and pearls -- so she might be either cheap or a racist or perhaps just careful. Won't dish the dirt with the rest of the girls. Not a gossip -- admirable, I suppose.

OK, she possesses these traits, some good, some less so; I still fail utterly to understand why their display draws one to the conclusion that the lady is a tramp.

She likes the free, fresh wind in her hair -- who doesn't? Life without care -- nice work if you can get it, I suppose. She's broke, but it's oke -- I don't know what the hell this even means. Hates California; it's cold and it's damp -- well, the bits north of San Luis Obispo or so can be accused of this, but it seems an awfully broad brush to paint our most populous state with.

Is it possible that we're working with some meaning of the word "tramp" that I'm unaware of? Mr. Webster gives us two possible definitions that might apply -- the lady is either a homeless person or she's a slut. Or a homeless slut, I suppose. A homeless slut whose admiration of the theater is matched only by her laudable punctuality. Might explain the avoidance of Harlem in ermine and pearls -- most vagrant strumpets of my acquaintance lack these fripperies in their wardrobes.

Could "she" be a tramp steamer? Seagoing vessels are often referred to using the female gender.... A tramp steamer that likes the free, fresh wind in her hair? That dislikes northern California's capricious weather? That refrains from tittle-tattle with others of her sex? That shuns gambling with European nobility?

I'm going with that. I've never known an itinerant cargo-vessel that was late to a play.

She weighs her anchor in old Frisco Bay
Picks up some rebar in far Mandalay
She runs on diesel -- the old-fashioned way
That's why the lady is a tramp
Steamer.

She likes the fresh sea breeze in her masts
Steam-whistle blasts
'Neath her keel
Is an eel
At night she displays a nautical lamp
That's why the lady is a tramp
Steamer!
Posted by Neddie at 10:46 AM

so good to have you back, Neddie!!!

Roger D. Parish said...
This comment has been removed by the author.
2:51 PM

Well, somebody got their creative juices stimulated, didn't they? You should sojourn to La-la Land more frequently, Neddie!

Good to have you back writing again. I've missed your posts.

I was going to mention the "blowing on some other guy's dice" thing but that's th' trollop in "Luck Be a Lady".

This lyric has always baffled me, too. I have finally come to the conclusion that all these non-sequiturs and contradictions are more a comment on the lady's detractors than on the lady herself. They simply don't like her, so anything she does "proves" she's a tramp.

Look, it's your by-the-numbers Madonna/Whore iconography, it doesn't need to make a damn bit of sense.

Larry Jones has a nice reconstructed interpretation, but given how dark the rest of the musical is, I'm afraid it's a bit too charitable.

Neddie, go find a somewhat older gentleman, ideally a rakish one, and ask him about dating nice catholic girls or preacher's daughters.

It's another Great American Songbook with a rarely-sung preceding verse that clarifies the lyrical idea. Ella Fitzgerald sings it. The idea is she'd rather be a Bohemian than trapped in stuffy New York Society. Note the portmanteau in the last line that explains this isn't a song about a prostitute, though I'm sure the possible misunderstanding was considered humourously naughty and wicked back in the day:

"I've wined and dined on Mulligan Stew and never wished for Turkey /
As I hitched and hiked and grifted too, from Maine to Albuquerque /
Alas, I missed the Beaux Arts Ball, and what is twice as sad /
I was never at a party where they honored Noel Coward /
But social circles spin too fast for me / My "hobohemia" is the place to be"